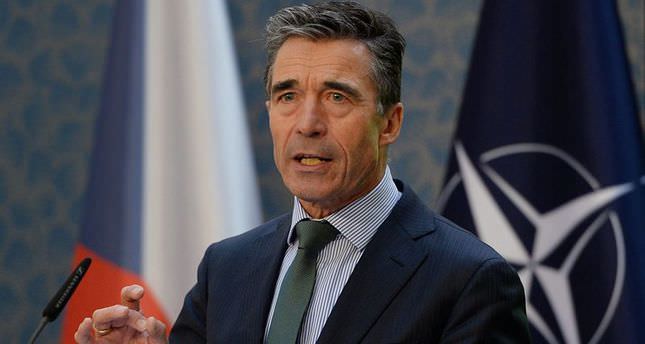 by Jun 16, 2014 12:00 am
NATO is preparing measures to help Ukraine defend itself in its stand-off with Russia, and must adapt to the fact that Moscow now views it as an adversary, Secretary-General Anders Fogh Rasmussen said in an interview published on Saturday.

Kiev blames Moscow for the separatist rising in east Ukraine, where the death toll rose on Saturday after pro-Russian separatists shot down a Ukraine army transport plane, and tensions are also high following Russia's annexation of Crimea.

While NATO has made clear it has no plans to get involved militarily in Ukraine, it has sent fighter aircraft and ships to eastern Europe and Rasmussen said it was considering long-term measures to ensure the protection of its allies.

"We must adapt to the fact that Russia now considers us its adversary," Rasmussen told El Pais newspaper.

He said NATO was preparing an aid package to present to its members' foreign ministers at the end of this month that would include help for Ukraine to reform its defence sector and modernise its armed forces.

Last week, NATO's top military commander said NATO and its member countries were considering requests from Ukraine ranging from help with communications and training to weaponry and lethal aid.

However, any assistance from NATO itself was likely to be advice rather than equipment. NATO officials have said the alliance does not have weaponry to supply and that any decision to give armaments to Ukraine would be for individual allies.

Still, the aid package could make it easier for Ukraine to take part in joint exercises and Rasmussen did not rule out that an individual NATO ally could take part in exercises on Ukrainian soil.