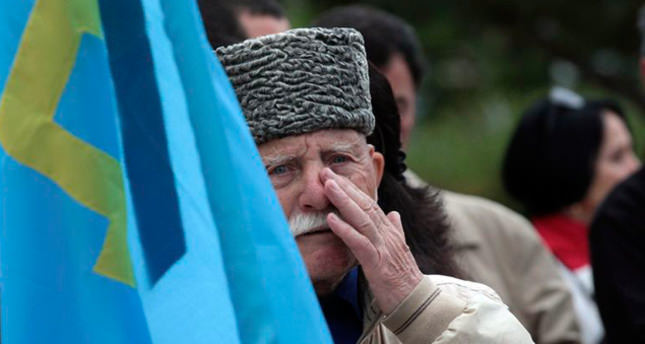 Gianni Magazzeni, a senior UN human rights official, said Tatars have been threatened with limits on their rights of expression, assembly, voting, employment and travel in Crimea.

According to the report, Tatars who crossed into Ukraine to vote on May 25 were subjected to vehicle and passport checks that left them fearing repercussions when they returned to Crimea.

Magazzeni said: "Crimean Tatars feel threatened. Some of them have spoken to us and quite clearly they felt threatened in the context of elections - for exercising their right to vote in the presidential election held on 25 May."

The fear of consequences and difficulties in crossing the border prevented many Tatars from travelling to Ukraine to vote, the report noted.
Crimea was annexed by Russia in March following clashes between pro-Russian protestors and Tatars in favor of remaining part of Ukraine and fearing a return to control by Moscow. Under Stalin, the region's Tatars were deported and most only returned to Crimea in the 1980s.
Magazzeni described how Tatars are "threatened" and some have felt compelled to resign from their jobs. Schools teaching in Ukrainian are also restricted in how they operate, he added.

"We all have to see the limitation of the right of expression and freedom of assembly in the context of the 70th anniversary of the deportation of Crimean Tatars," he said.

Referring to figures from UNHCR, the United Nations refugee agency, he said there were more than 34,000 internally displaced people (IDPs) in Ukraine, at least 10,000 of whom are Crimean Tatars.

Magazzeni also reported that 356 people, including combatants, are known to have been killed in eastern Ukraine since mid-April. He referred to a "regime of fear, if not terror" in the separatist-controlled areas around Donetsk and Luhansk.

Tensions remain high in eastern Ukraine where pro-Moscow separatists and government forces continue to clash after President Poroshenko vowed to "ensure peace and stability" by retaining control of the eastern regions.