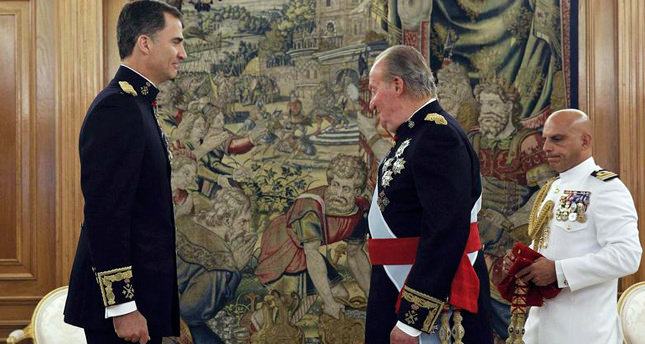 by Jun 19, 2014 12:00 am
Spain's new king, Felipe VI, will be sworn in later on Thursday in a low-key ceremony which monarchists hope will usher in a new era of popularity for the troubled royal household.

Felipe becomes king after his father, Juan Carlos, abdicated earlier this month following a series of scandals that led many Spaniards to question the role of the monarchy itself.

The ceremony, at Spain's lower house of parliament, has little pomp and circumstance compared with royal handovers in other countries. It is more of a legal process, attended by lawmakers, high-level politicians and some members of the royal family. No foreign leaders have been invited.

The event has been designed to chime with times of austerity, palace officials say, mindful that more than one in four Spanish workers is jobless despite an incipient economic recovery.

Hopes for the new king are high, and some believe that, despite his role being mainly symbolic as head of state, he will use his position to push dialogue over the challenge of a separatist movement in wealthy northeastern Catalonia.

Felipe, who is 46, will wear military uniform with a sash and swear loyalty to Spain's constitution before addressing the chamber. After the ceremony he will be driven through central Madrid with his wife, Queen Letizia, a former journalist.

"The new king is going to contribute his own personality and ideas and a lot of people hope he will bring change to Spain. I personally hope for greater unity," said Alba, 20, who had gone to central Madrid with her mother and sister to catch a glimpse of the new king after his swearing-in.