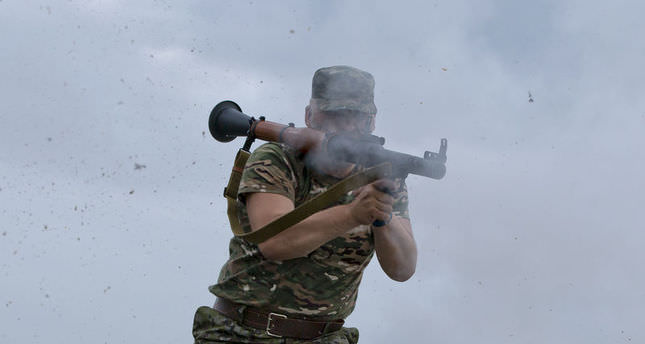 by Jun 20, 2014 12:00 am
Fighting raged for a second successive day in the east of Ukraine on Friday, a day after clashes in which Ukrainian government forces said about 300 separatists were killed.

The casualty figures for the pro-Russian separatists could not be independently confirmed though a rebel commander said on Thursday the rebels had sustained "heavy losses" when they were outgunned by government forces backed by heavy armour.

The government forces said seven of their own number had been killed in Thursday's fighting. The new fighting on Friday was about 100 km (60 miles) from the border with Russia.

Fighting broke out just east of the town of Krasny Liman early on Thursday after pro-Russian separatists refused to lay down their weapons in line with a peace plan proposed by President Petro Poroshenko, the government forces said.

The government forces have been gradually squeezing rebels in the area though separatists, who rose up against central rule from Kiev following the overthrow of a president sympathetic to Moscow, still control the strategic city of Slaviansk.

Vladyslav Seleznyov, a spokesman for Kiev's "anti-terrorist operation", said about 300 separatists had been killed in action around the villages of Yampil and Zakitne which included artillery fire and air attacks.

Heavy weapons had been seized from the separatists, including an armoured personnel carrier, a truck with a high-calibre machine gun mounted on it, a shoulder-launched missile, grenade launchers and small arms, Seleznyov said on his Facebook page.