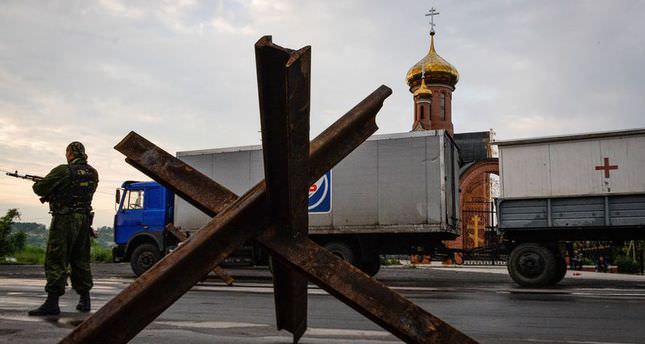 by Jun 21, 2014 12:00 am
Pro-Russia separatists in Ukraine's embattled east have dismissed a unilateral cease-fire ordered by President Petro Poroshenko as fake, while nine Ukrainian service members were wounded in clashes overnight.

Otherwise, no large-scale fighting had been reported Saturday, the opening day of what is to be a six-and-a-half-day stand-down by the Ukrainian military.

Poroshenko ordered the cease-fire starting at 10 p.m. Friday as a first step in a peace plan he hopes will end a conflict that has left hundreds of people dead and weighed heavily on the country's economy.

The plan includes an amnesty for fighters who lay down their arms, and a chance for them to leave the country. That is to be followed by local and parliamentary elections and a jobs program.

Separatist leaders have rejected the cease-fire and said they will not disarm. In Donetsk, a group of armed men gathered in the central square to take a military oath to the self-proclaimed Donetsk People's Republic.

Pavel Gubarev, who describes himself as the governor of the Donetsk People's Republic, said there was no cease-fire near Slovyansk, scene of serious clashes over the past several months.

"There is no cease-fire over there," Gubarev said. "There is shooting all the time, and this cease-fire that Poroshenko is talking about is just fake. The Ukrainian forces are either not under his control, or he is just a liar."

The Ukrainian Border Guard Service reported overnight attacks on two border posts in the Donetsk region, which left three troops injured, hours after the cease-fire was announced. One of the posts, Vyselky, was attacked with mortar and sniper fire for half an hour, the border guards said.

An attack on another border post, Izvaryne, immediately before the cease-fire left six men injured, the Border Guard Service said.

Ukraine's Defense Ministry reported two attacks on the quarters of a missile unit in the village of Avdiyivka. Kiev said men armed with automatic rifles and grenade launchers attacked the base at 11 p.m. - one hour after the cease-fire was announced - prompting the army to respond. The rebels left in the morning, the defense ministry said.

The U.N. says 356 people have died in violence in Ukraine since May 7, and 34,000 have left their homes. The U.N. count did not include several recent clashes and fighting before May 7.