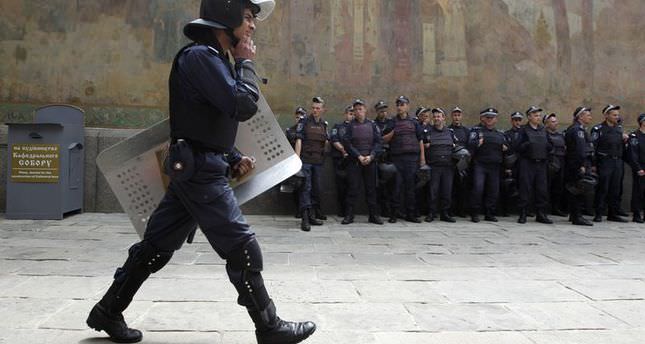 by AA Jun 22, 2014 12:00 am
The unilateral ceasefire declared on Friday does not mean that the Ukrainian security forces will not return fire if army or civilians are attacked by separatists, Ukrainian President Petro Poroshenko said on Sunday.

In a statement published on his website, Poroshenko said the government would negotiate peace only with regional leaders, not with separatists, after the end of the week-long ceasefire.

On Friday night, Poroshenko declared a week long unilateral ceasefire in the east of the country to give diplomacy a chance to put an end to clashes between Ukrainian army and pro-Russia separatists.

He also presented a 15-step peace plan which includes safety guarantees for all negotiating participants, amnesty for those who lay down weapons and for those who have not committed serious crimes, and the liberation of hostages.

The Council of Europe welcomed the peace plan and called on the government to start negotiations as soon as possible.

Thorbjorn Jagland, secretary-general of the council, said in a written statement on Sunday that the plan was an important step towards lasting peace and stability in Ukraine.

"What is essential now is that all sides refrain from violence and respect human rights and the rule of law," he said.

- Ceasefire gets limited support from separatists

Meanwhile, pro-Russia insurgents in Donetsk appear reluctant to comply with the ceasefire.

An Anadolu Agency correspondent reported from Slavyansk on Sunday that separatists intensified their efforts to protect the checkpoints they had been holding since taking control of the town in late March.

Pro-Russia gunmen have reportedly been checking the identity cards of all people driving through the roads on which they set up road blocks.

In his declaration of the ceasefire, Poroshenko warned that "in case of an armed attack on the Ukrainian units or civilians, our servicemen will open fire in response."

According to the AA correspondent, some separatists believe that the army will kill them if they lay down their arms.

Ukraine's military and pro-Russia separatists have been engaged in constant fighting for more than two months in the country's eastern provinces of Donetsk and Lugansk where pro-Russia sentiments are running high among the ethnic Russian community.