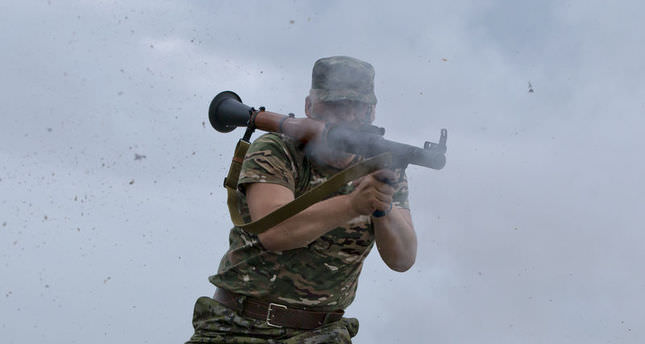 by Jun 23, 2014 12:00 am
Fighting flared between Ukrainian and pro-Moscow separatist forces, both sides reported on Sunday, further straining a unilateral ceasefire declared by Ukraine as Russian President Vladimir Putin pressed Kiev to talk to the rebels. Putin and Ukrainian President Petro Poroshenko, at separate ceremonies marking the anniversary of Nazi Germany's invasion of the Soviet Union, both stressed the need to bring peace to Ukraine's rebellious east.

The seven-day ceasefire came under pressure almost as soon at it began on Friday night, with the government accusing the separatists of attacking its military bases and posts on the Russian border. The violence continued for a second night into Sunday.

"Unfortunately, what we are seeing ... tells us that the fighting is still going on and last night we saw some active use of artillery from the Ukrainian side," Putin said after laying flowers at the Tomb of the Unknown Soldier in Moscow.

He said it was not clear whether artillery was used by the Ukrainian army or the "so-called paramilitary of the right-wing forces" supporting the government. He appeared to attach no blame to separatist forces.

Poroshenko wants Putin's unqualified backing for a 15-point peace plan he announced on Friday, before meetings with the European Union in the coming week. These will include the signing on June 27 of an association agreement with the bloc which includes a free trade deal.

In his comments published on the Kremlin website, Putin repeated his support for the ceasefire and peace plan in only general terms.

"We need to ensure that all fighting is stopped," he said. "Ultimately the political process is the most important. It is important that this ceasefire lead to dialogue between all opposing sides in order to find compromises acceptable for all."

Poroshenko told U.S. Vice President Joe Biden during a phone call on Sunday that Russian separatists continue to attack Ukrainian forces, including with artillery, despite the ceasefire, the White House said.

"The vice president reiterated that the United States was working closely with its G-7 partners to prepare further economic sanctions against Russia if Moscow did not take actions ... to stop the flow of arms and militants across the border and use its influence to publicly call on the separatists to lay down their arms," the White House added.

The insurgency in the largely Russian-speaking east erupted in April after street protests in the capital Kiev toppled the Moscow-backed leader Viktor Yanukovich. Russia subsequently annexed Ukraine's Crimean peninsula and the West has accused Russia of supporting the insurgency.

French President Francois Hollande and German Chancellor Angela Merkel urged Putin by telephone on Sunday to work for the resumption of talks to end the conflict, Hollande's office said. The two leaders "reiterated the importance of ensuring full control of the Russia-Ukraine border to prevent the infiltration of gunmen and military equipment", the statement said. In Kiev, Poroshenko stressed the need for dialogue, saying his plan "was specifically put together to ensure peace, the laying down of weapons and to establish, through talks, a single united state", news agency Interfax Ukraine quoted him as saying. Ukraine's state border service reported further rebel attacks on its posts in Luhansk region on Sunday, while a separatist spokesman said Ukrainian forces were firing mortars at a village near the Russian frontier. In Donetsk region, which like Luhansk has declared itself a "people's republic", rebels reported a morning shootout with Ukrainian troops in Siversk, north of the city of Donetsk.