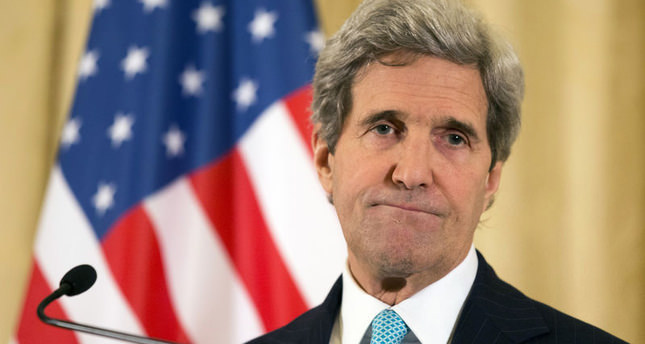 by Jun 23, 2014 12:00 am
US Secretary of State John Kerry landed in Baghdad on Monday to press Prime Minister Nuri al-Maliki to form a more inclusive government to quell a Sunni insurgency that has swept much of northern and western Iraq.

Kerry's visit came after Sunni militants took strongholds along the border with Syria at the weekend, strengthening their supply routes.

Kerry would "discuss US actions underway to assist Iraq as it confronts this threat and urge Iraqi leaders to move forward as quickly as possible with its government formation process to forge a government that represents the interests of Iraqis," State Department spokeswoman Jen Psaki said.
advertisement

Kerry said on Sunday the United States would not pick or choose who rules Baghdad. He said, however, Washington had noted the dissatisfaction among Kurds, Sunnis and some Shi'ites with Maliki's leadership and emphasized that the United States wanted Iraqis to "find a leadership that was prepared to be inclusive and share power".

A senior State Department official said the US believed the push by the militants toward Baghdad had slowed although the capture of remote border crossings was a serious concern.

"The progress towards Baghdad has definitely slowed," said the official, who briefed reporters on the situation in Iraq. "So the threat to Baghdad is not nearly as immediate as there was some concern in those early days about just how far this could go."