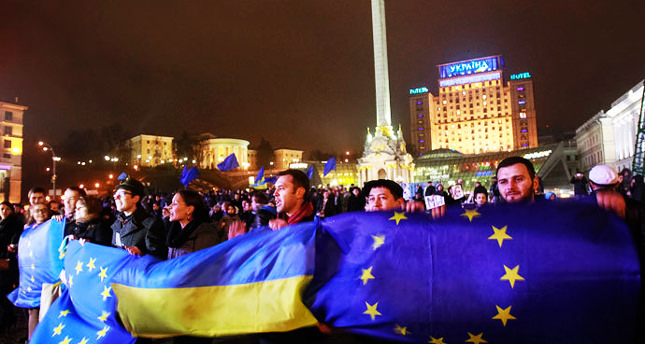 by Associated Press Jun 27, 2014 12:00 am
Ukrainian President Petro Poroshenko has signed up to a trade and economic pact with the European Union, saying it may be the "most important day" for his country since it became independent from the Soviet Union.

Businesses in the three countries whose goods and practices meet EU standards will be able to trade freely in any EU country without tariffs or restrictions. Likewise, EU goods and services will be able to sell more easily and cheaply to businesses and customers in Ukraine, Georgia and Moldova.

"It's absolutely a new perspective for my country," Poroshenko said.

It was the decision of his predecessor, Viktor Yanukovych, to back out of the EU association agreement in November that touched off massive protests in Ukraine, and that eventually led to Yanukovych's flight to Russia and Russia's occupation and annexation of Ukraine's Crimean Peninsula.

Before the signing, Poroshenko brandished a pen, saying it was the same pen Yanukovych was supposed to use the sign the Association Agreement at the EU summit in Vilnius last fall.

"Historic events are unavoidable," he said.

Perhaps more important than the trade deal is an accompanying 10-year plan for Ukraine to adopt EU product regulations. Such rules are important because they ease the way for international trade beyond Europe.

The deal also demands that Ukraine change the way it does business. Adopting EU rules on government contracts, competition policy and the copyright for ideas and inventions should improve the economy by making it more investor-friendly and reducing corruption.Ukraine, EU sign historic trade and economic pact