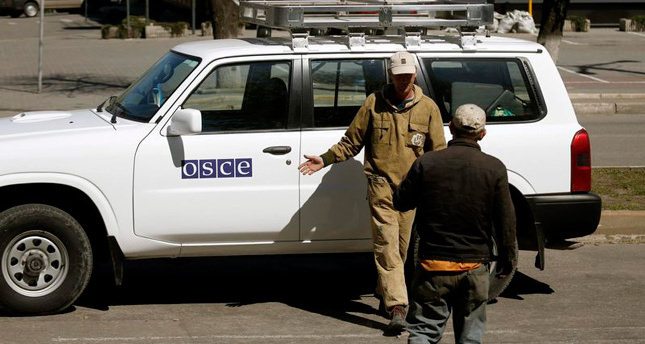 by Jun 27, 2014 12:00 am
Rebels in southeast Ukraine early on Friday released a Turkish and three other international observers captured over a month ago, in an apparent goodwill gesture that could help pave the way to a resolution of the conflict that has so far claimed hundreds of lives.

Pro-Russian separatists had detained eight observers from the Vienna-based Organisation for the Security and Cooperation in Europe (OSCE) – including Turkish observor Mehmet Kılıç -- tasked with monitoring an agreement drafted in Switzerland in April to de-escalate the crisis that has pitted the rebels against leaders in Kiev.

Four observers from Switzerland, Turkey, Estonia and Denmark, part of the 100-strong mission, were brought by heavily armed rebels to a hotel in downtown Donetsk, where they were handed over to their colleagues. Another four remain in rebel captivity in the neighbouring Luhansk region.

"It was a long road and this release is the fruit of good will and it was unconditional," Alexander Borodai, prime minister of the self-styled Donetsk People's Republic, told reporters. "I am hoping we can facilitate the release of the four remaining observers."

Securing the release of the four OSCE hostages has been a part of peace consultations between mediators of the Kiev government, OSCE, Russia and rebel leaders.

The ceasefire between the rebels and the government, set to expire later on Friday, has already been marred by a number of violations, including the downing of a Ukrainian helicopter earlier this week with the loss of all nine people on board.

Mark Etherington, the senior OSCE mediator in southeastern Ukraine, said the mission was "profoundly grateful" to all who facilitated the release of the hostages. He did not elaborate.