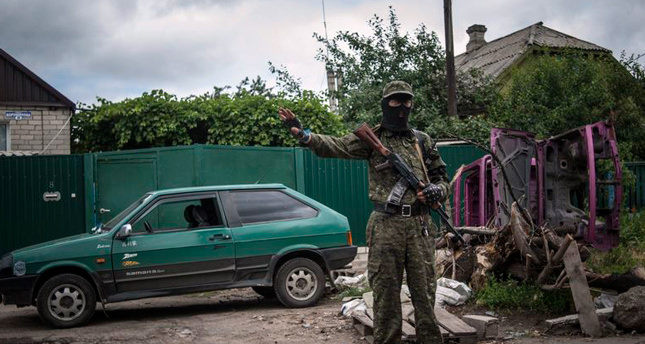 by Anadolu Agency Jun 28, 2014 12:00 am
Isolated incidents of violence occurred Saturday in the eastern Ukrainian region of Donetsk, the Interfax news agency reported, but the ceasefire extension agreed to by the government and separatists appeared to be holding.

President Petro Poroshenko's office announced early Saturday that the ceasefire had been extended until 1900 GMT Monday. The pro-Russian rebels also agreed to the truce after discussions with mediators representing the government.

Ukrainian Defence Minister Mikhail Koval said there were occasional provocations despite the ceasefire but the situation was under control. Andriy Lysenko, a spokesman for the Ukrainian National Security and Defence Council, said there was a plan in place for the period after the ceasefire.

Rudenko alleged that the ceasefire, which began June 20 and had been set to expire late Friday, was aimed at giving the military time to strengthen its positions against the separatists.

Pro-government forces in turn accused the rebels of shooting at soldiers at Kramatorsk airport. But there were no casualties, according to Dmitry Tymchuk, a Kiev-based military analyst.

Russian Foreign Minister Sergei Lavrov praised Poroshenko's peace initiatives in an interview with state television but also said that other actors were also involved, such as radical and ultranationalist forces and what he described as mercenaries of oligarchs.

Lavrov warned that these were influential groups that would not listen to Poroshenko.