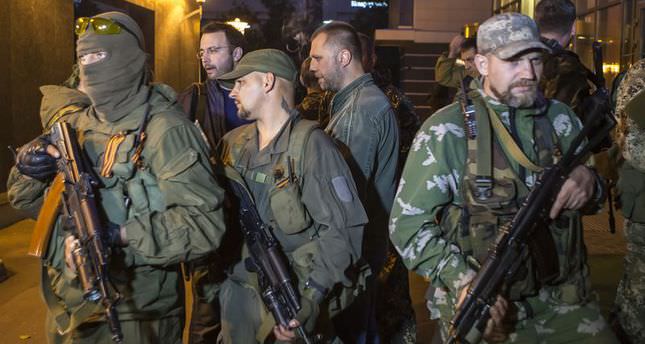 by Associated Press
Jun 29, 2014 12:00 am
Pro-Russian insurgents on Saturday released a second team of observers from the Organization for Security and Cooperation in Europe, who had been held captive since the end of May, the organization said.

OSCE spokesman Michael Bociurkiw said that the four observers were released and met by an OSCE official in the eastern city of Donetsk.

The second release followed a European Union summit Friday, where leaders decided not to immediately impose new sanctions on Russia for destabilizing eastern Ukraine, but gave the Russian government and pro-Russian insurgents until Monday to take steps to improve the situation. The EU leaders said Russia and the rebels should work to release all captives, retreat from border checkpoints, agree on a way to verify the cease-fire and launch "substantial negotiations" on Ukrainian President Petro Poroshenko's peace plan.

"We have fulfilled our obligations before the Ukrainian side. All eight observers have been released," Alexander Borodai, one of the leaders of the insurgents, said after the release, according to news agency Interfax.

Ukraine on Friday signed a free-trade pact with the EU, the very deal that a former Ukrainian president dumped under pressure from Moscow in November, fueling huge protests that eventually drove him from power. Moscow responded to those events by annexing the mainly Russian-speaking Crimean Peninsula in March, and a pro-Russian insurgency in eastern Ukraine erupted the month after, leading to the developments that have brought Russia-West relations to their lowest point since the Cold War times.

The United States and the EU have slapped travel bans and asset freezes on members of Russian President Vladimir Putin's inner circle and threatened to impose more crippling sanctions against entire sectors of Russia's economy if the Kremlin fails to de-escalate the crisis.

Earlier Saturday, Russia's foreign minister accused the U.S. of encouraging Ukraine to challenge Moscow and heavily weighing in on the European Union. In televised remarks, Sergey Lavrov said that "our American colleagues still prefer to push the Ukrainian leadership toward a confrontational path."

He added that chances for settling the Ukrainian crisis would have been higher if it only depended on Russia and Europe.

The weeklong cease-fire, which both sides have been accused of violating, expired at 10 p.m. local time (1900 GMT) on Friday, but Poroshenko quickly declared its extension until 10 p.m. local time Monday. He warned, however, that the cease-fire could be terminated in areas where rebels violate it.

Borodai promised to abide by the extended cease-fire after Friday's troika talks that included a former Ukrainian president who represented the Kiev government, the Russian ambassador and an OSCE envoy.

He rejected the EU leaders' demand to retreat from three checkpoints on the border with Russia captured by the rebels, but invited OSCE to send its monitors to the border crossings and any other areas in the east.

Borodai also demanded that the Ukrainian government pull back its forces as a condition for holding meaningful talks to settle the crisis.

Swiss President Didier Burkhalter, whose country currently chairs the OSCE, said in a statement he hopes the release of the observers will give the organization's special monitoring mission in Ukraine the opportunity to carry out its mandate "to the maximum extent possible and strengthen its role as international presence in the country."

He also said he hopes that the release will "mark the beginning of an improving security situation in the eastern region of Ukraine."

Ukrainian military spokesman Olexiy Dmitrashkovskiy said Saturday that three Ukrainian soldiers were killed and four others were wounded in a rebel shelling near Slovyansk, a key flashpoint in the insurgency, Interfax reported.

Rebels, in turn, claimed that Ukrainian troops tried to capture one of the checkpoints on the Russian border, which they control, but were rebuffed.

Russian officials said that several Ukrainian shells landed on Russian territory early Saturday, and one shell fragment hit the border checkpoint on the Russian side of the border, but there were no injuries.

The insurgents also descended on a Ukrainian National Guards unit in Donetsk, demanding that the troops leave or join the rebels' ranks. None of the troops voiced a desire to switch sides. There was no fighting there.

As part of his peace plan, Poroshenko this week submitted a set of constitutional amendments that would give broader powers to the regions and allow local authorities to have more say on such issues as language and culture. In an address to the nation Saturday, he voiced hope that the move would strengthen the country's unity.

Lavrov acknowledged that Russia has some leverage with the rebels, but claimed that Moscow's influence is limited.

"There are reasons to believe that they hear us on other aspects of Russian position regarding the crisis in Ukraine, but that doesn't mean that they immediately move to heed our calls," he said. "These people have their own vision, it's their land and they want to be its masters, they want to negotiate with the central government on what terms it can be done."