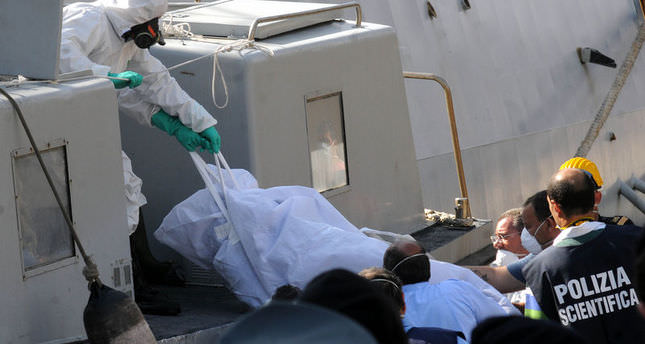 by Jun 30, 2014 12:00 am
About 30 bodies have been found in a migrant boat which was stopped between Sicily and the North African coast, Italian news agencies reported this morning (30 June), citing the navy and coastguard.

The rescuers made the gruesome discovery when they boarded a fishing boat carrying around 590 refugees and migrants to evacuate those in most distress, including two pregnant women.

The immigrants apparently died of asphyxiation, the news agencies said. It is not the first time Italian rescuers have found migrants dead on the overcrowded boats but never before were there such a large number.

The boat is being towed by the Italian navy and is expected to arrive later Monday in Pozzallo on the southeast coast of Sicily.

Over the past weekend more than 1,600 migrants were rescued by Italian authorities, bringing the total number of migrants so far this year to above 60,000.

The number is expected to soar past the record 63,000 set in 2011 during the Arab Spring uprisings.

Italy has long borne the brunt of migrants making the perilous crossing from North Africa to Europe, but EU border agency Frontex says there has been a significant rise in numbers in recent months.

The last few weeks have seen a series of tragedies, with ten people drowning and 39 having to be rescued after their boat sank off the Libyan coast earlier in June.

Italian interior minister Angelino Alfano has called for the rescue operation to become a European initiative amid reports of thousands of migrants waiting in Libya to make the trip during the next few weeks.

Italy has repeatedly asked for more European Union countries to join Mare Nostrum, which is Europe's biggest ever search-and-rescue mission, but so far only Slovenia has chipped in, offering one ship for two months late last year.

The Italian presidency of the EU starting on 1 July will make it a priority to push for concerted action.