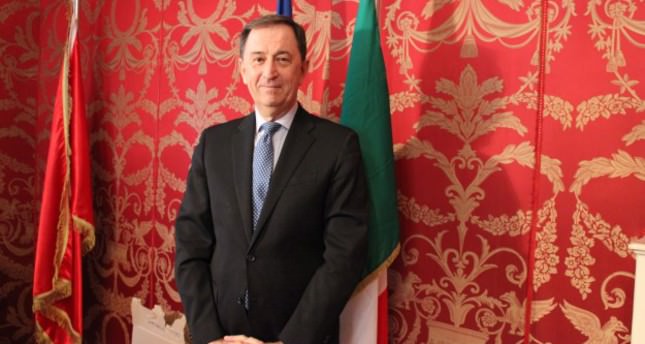 by Daily Sabah Jun 30, 2014 12:00 am
Gianpaolo Scarante, Italy's ambassador to Turkey has recently made remarkable statements regarding Turkey's membership in the European Union as he expressed, Italy, which will soon hold the rotating EU presidency favors and supports Turkey's membership.

Stating that the results of the European Parliamentary elections indicated that Europeans desire a more effective, dynamic and representative EU, Scarante claimed European citizens especially demand resolving the economic crisis and the issue of unemployment, which he expressed will be addressed by Italy's 6-month presidency in the EU. "Growth, unemployment and innovation will be the key words to resolve this crisis," Scarante stated, who referred to new political powers in Europe and claimed they will renew the current system.

Addressing his Turkish counterparts, Scarante claimed racism has never prevailed in Europe as the people of Europe and the European Parliament are against racism. "Our goal is to make sure Turkey is included in Europe and this will be our priority," said the ambassador who noted Italy supports the opening of all chapters in the negotiation process and expressed failure to do so would result in a serious interruption to the dialogue that could be established between Turkey and the EU. He reported that the chapters on energy resources were especially important as the current crisis in the region leads Turkey to become an intersection in terms of the transfer of energy. "Turkey will not only contribute to the EU in economic means but it will also contribute in terms of social and cultural activities" said Scarante.

There are a total of 35 chapters which must be completed by Turkey but only 14 has been addressed as 17 chapters are currently blocked. Turkey continues to implement numerous reforms in line with the EU.