At least four people killed as fighting in Ukraine resumes 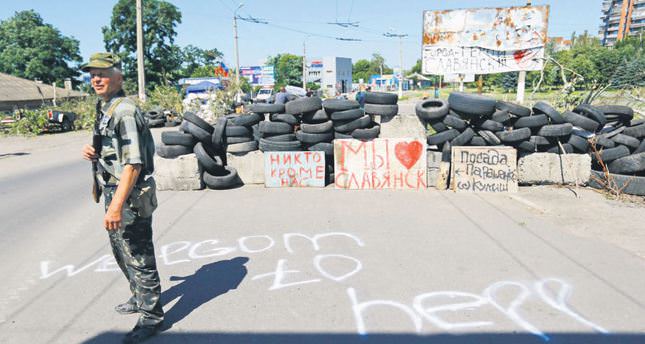 Ukrainian government forces launched airstrikes and artillery assaults on pro-Russian separatists in eastern regions of the embattled country, a military spokesman said, after President Petro Poroshenko announced he would not renew a ceasefire

Fighting in eastern Ukraine resumed yesterday hours after President Petro Poroshenko declared an end to a ceasefire that had only been patchily observed.

Four people were killed and five injured when a shuttle bus was hit by gunfire in the city of Kramatorsk, the Donetsk regional government reported without giving further details. A leader of pro-Russian separatists in Donetsk, Miroslav Rudenko, told Russia's Interfax news agency that fighting had broken out in the city of Kramatorsk, the village of Karlivka and at Donetsk's airport.

The Ukrainian Defense Ministry said that troops were carrying out airstrikes and artillery strikes "to counter the obvious risk of terrorist bands attacking civilian objects."

Poroshenko said in a television address early on Tuesday that a 10-day ceasefire was over and that government troops would "go on the offensive and liberate our country." He accused the rebels of not complying with the truce and undermining his peace plan with "criminal acts."

He told them that Kiev was ready to begin political negotiations only if basic items of his peace plan were implemented, including a bilateral ceasefire and reliable controls on the Ukrainian-Russian border, his office said.

However, a senior presidential aide said Tuesday that a fresh round of talks with separatists was still on the table. "I do not exclude that another session of the contact group will happen, not in eastern Ukraine, but in [the Belarusian capital] Minsk," Iryna Herashchenko told reporters in Kiev according to Interfax Ukraine.

Meanwhile, the EU government decided yesterday that they were not ready to immediately impose new sanctions on Russia over the crisis in Ukraine, as a ceasefire to allow for peace talks expired and fighting broke out in the east of the country.

Senior EU diplomats met in Brussels on Tuesday morning to consider whether new measures were needed after a summit of EU leaders on Friday warned Moscow that sanctions were in the cards if peace talks didn't produce results. "[They] decided they will monitor the situation," one EU diplomat said, speaking on condition of anonymity. "The picture on the ground is mixed. In the meantime, there are intensified preparations for sanctions."

Two other diplomats confirmed the assessment. The speaker of Russia's lower house of parliament called for a new ceasefire in east Ukraine, hours after Kiev ordered a resumption of a military campaign to end a pro-Russian separatist rebellion.

Ukrainian President Petro Poroshenko opted not to extend a ceasefire that had been intended to allow for peace talks with the rebels, saying the separatists had failed to keep to the truce or follow a peace plan he had outlined.

Sergei Naryshkin, chairman of the State Duma lower house and an ally of President Vladimir Putin, criticized Poroshenko's decision in comments to Russian reporters. "We think that without a truce, without the start of dialogue, it is simply impossible to restore peace, justice and law and order in Ukraine," Naryshkin was quoted as saying by Interfax news agency.

Naryshkin accused Ukraine's Western allies of turning a blind eye to what he called human rights abuses and a flood of refugees fleeing Ukraine. "It's the theater of the absurd," Naryshkin was quoted as saying. He added that representatives of some Western countries were acting strangely, "as if they don't notice what is happening in Ukraine, as if the crisis and civil war are not happening in the center of Europe."

Meanwhile, Russian President Vladimir Putin accused Ukraine of using "blackmail" in negotiations on gas prices and that Kiev had demanded a "totally unjustified" price cut for supplies of Russian gas.

In comments to his ambassadors, Putin also said "conscientious" consumers and suppliers should not suffer from "the actions of Ukrainian politicians."
RELATED TOPICS