Ukraine presses on with attacks on separatists after failed truce 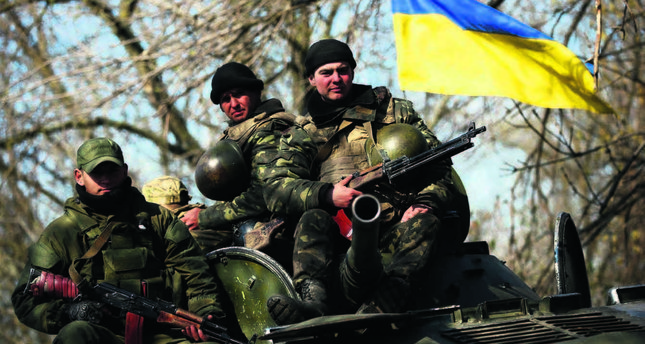 by Jul 02, 2014 12:00 am
Ukrainian forces pressed on with their assault on pro-Russian insurgents after Kiev's Western-backed leader brushed off European efforts to save a tenuous truce, prompting Russia to raise alarm over the "swiftly deteriorating" situation.

The return of all-out fighting in Europe's worst security crisis in nearly two decades set off a new international scramble to regain some control over events in the strategic ex-Soviet state.

A diplomatic source said the foreign ministers of Germany, France and Russia would discuss the latest escalation with their Ukrainian counterpart on Wednesday in Berlin.

In opting not to extend the 10-day truce, Ukrainian President Petro Poroshenko had said the ceasefire was used by the separatists in restive eastern Ukraine to regroup and stock up on heavy arms from Russia.

"Peace has been and will remain my main goal. Only the means to achieve it have changed," the 48-year-old leader said.

Russia immediately expressed its "deep regret" about abandoning the truce, while France's foreign minister vowed there would be no let-up in Western efforts to find a lasting solution to nearly three months of clashes that have claimed more than 450 lives.

Putin said Poroshenko was assuming responsibility for future casualties and gathered his top security aides to discuss the "swiftly deteriorating" situation in his western neighbour.

US Secretary of State John Kerry in a call to his Russian counterpart Sergei Lavrov Tuesday made clear that the US and its European partners "will continue to press Russia to end all support and weapons flowing to separatists," and do more to police the porous border, a State Department spokesman said in a statement.

The Kremlin denies the charges of arming the pro-Russian rebels but still faces the threat of devastating Western sanctions against Russia's financial and energy sectors should Putin fail to demonstrate a clear desire to resolve the conflict.

Both separatist fighters and pro-Kiev leaders reported heavy exchanges of artillery fire and air bombardments across the rebel stronghold regions of Lugansk and Donetsk bordering Russia.

The regional administration of Donetsk said four civilians were killed and five wounded when their bus came under fire near the town of Kramatorsk.

"They announced a ceasefire but still continued to shoot. But now things will get even worse," said shopkeeper Yevgenia Maluta as she surveyed badly damaged houses in the rebel-held eastern town.

Locals in Kramatorsk said shelling Tuesday morning had killed five people as both sides resorted to all the weapons at their disposal.

Witnesses also reported a heavy tank battle being waged near the Donetsk region village of Karlivka and intense clashes in the nearby town of Mariinka.

Yet Kiev could claim few actual gains on the ground. Poroshenko said his forces had seized back one of 24 Russian border crossings in the Lugansk region.

He congratulated the troops with their "first victory", but most of the other roads into Russia remain guarded by the militias and the rebels soon adamantly denied Poroshenko's claim.

Poroshenko's decision to resume a military offensive came just hours after the leaders of France and Germany joined him on a conference call to Putin -- the third such conversation in five days.

French President Francois Hollande and German Chancellor Angela Merkel had been in rare agreement with Putin that Poroshenko should extend the truce to give indirect talks between separatist commanders and Kiev a chance.

But dialogue has thus far failed to end clashes that have displaced tens of thousands and shuttered dozens of coal mines and steel mills whose operation is vital to Ukraine's teetering economy.

Poroshenko told the three leaders that insurgents had attacked Ukrainian positions more than 100 times during the truce.

The separatists likewise accuse government forces of having continued to shell the dozen cities and towns under their control during the official halt of hostilities.

Both Kiev and its Western allies have accused Putin of helping to arm and fund the separatists in reprisal for the February ouster of Ukraine's Kremlin-backed leader who had rejected closer European ties.

An EU diplomat told AFP that the European Union was preparing new punitive measures that for the moment stopped short of an all-out restriction of the 28-nation bloc's banks from working with their Russian counterparts.

The Russian strongman has publicly taken a more conciliatory approach to Kiev in response to the Western threat.

He has pressed for direct negotiations and a long-term truce. Western powers have also reported a significant withdrawal of Russian forces from the border with Ukraine.

But Putin has notably refused to meet the main Western demand of calling on the rebels to lay down their weapons and relinquish control of roadblocks and border crossings across Lugansk and Donetsk.