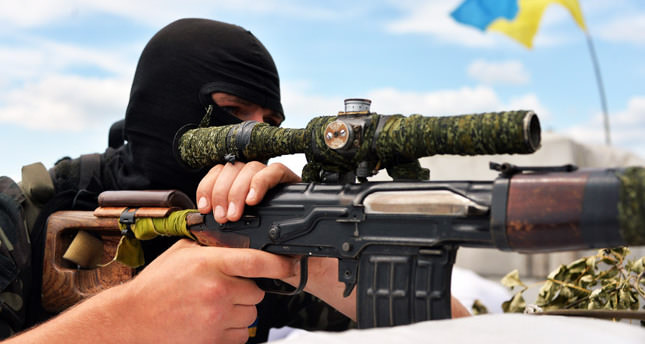 by Jul 05, 2014 12:00 am
Ukraine's interior minister said on Saturday that most pro-Russian rebels and their top commander had fled their main eastern stronghold in what would be Kiev's biggest success of the nearly three-month campaign.

"This morning, intelligence reported that Girkin (Igor Strelkov) and a substantial part of the rebels had fled Slavyansk," Ukraine's Interior Minister Arsen Avakov said in reference to the industrial city of nearly 120,000 the insurgents captured on April 6.

Ukraine alleges that Strelkov is a colonel in Russia's military intelligence unit know as the Chief Intelligence Directorate (GRU).

Both Strelkov and Moscow deny any GRU link despite Western claims that the Kremlin is covertly funding and arming the uprising to destabilise Kiev's new pro-European leaders and retain control over over Russia-speaking eastern regions of Ukraine.

Avakov said in a Facebook post that the militias were fleeing to Gorlivka -- a city of 260,000 about 50 kilometre (30 miles) southeast of Slavyansk that also remains largely under the militias' control.

He wrote in a later post that civilians were taking over roadblocks previously controlled by the insurgents "and carrying weapons and bulletproof vests abandoned by the rebels".

A Human Rights Watch observer who said she was in the area confirmed Avakov's claim in a tweet.

"Between 8 and 9 this morning saw insurgents leaving #Slavyansk via #Kramatorsk," Tatyana Lokshina said in a post.

"They were saying, 'the city's fallen, everyone's getting out'," she wrote.

Strelkov himself told the pro-Kremlin LifeNews channel on Friday that his units "will be destroyed... within a week, two weeks at the latest" unless Russia helped secure an immediate truce or moved in its troops.

Slavyansk is the symbolic heart of an uprising sparked by the February ouster of a pro-Kremlin administration in Kiev and fuelled by Russia's subsequent seizure of Crimea.

Relentless shelling and sniper fire have since killed more than 470 people and left Western leaders frustrated by repeated mediation failures.

Clashes in the economically-vital border regions of Lugansk and Donetsk have picked up with renewed vigour since Poroshenko tore up a 10-day ceasefire agreement earlier this week.

His decision was immediately followed by the launch of a "massive" offensive by Kiev that led President Vladimir Putin to warn that Russia had the right to protect its compatriots in Ukraine.

But Poroshenko's call for talks on Saturday have yet to be confirmed by either Moscow or mediators from the Organisation for Security and Cooperation in Europe (OSCE) -- a Vienna-based body first formed to preserve peace on the continent during the Cold War.

Kiev has balked at the idea of holding round-table talks in Donetsk -- a location in which Moscow carries widespread influence and prefers. But the insurgents refuse to travel to Kiev or EU member countries for fear of their immediate arrest.

The number two man in the separatist Donetsk cabinet suggested to Interfax on Friday that the round-table discussion be convened in the Belarus capital Minsk.

The 43-year-old Strelkov remains one the uprising's most mysterious but also powerful figures who effectively headed the new Kiev leadership's most-wanted list.

He holds the title of "defence minister" of the self-proclaimed Donetsk People's Republic and is also the chief of the Slavyansk militia.

Strelkov was linked to the April capture and detention of seven OSCE monitors in Slavyansk who were eventually released after an eight-day ordeal following intervention from Moscow.

Kiev has published what it says are intercepted conversations between him and Putin's special envoy Vladimir Lukin talking about the OSCE monitors.

"We want to liberate Ukraine from the fascists," Strelkov told a Russian tabloid after his units had captured Slavyansk.