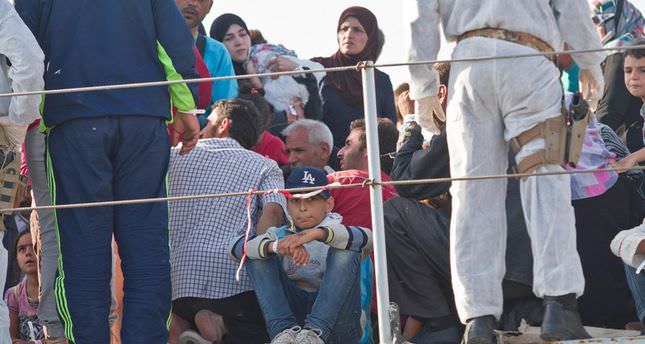 by Jul 08, 2014 12:00 am
Italy's search and rescue mission saved more than 2,600 migrants from boats in the Mediterranean over the weekend, the navy said on Monday, as the number reaching Italy from Africa this year surges to a record.

Boats and helicopters from the "Mare Nostrum" or "Our Sea" mission picked up the predominantly male migrants, along with some minors and a nine-months pregnant woman, between Saturday and Monday in the Strait of Sicily.

Southern Italy has long attracted sea-borne migrants from Africa seeking a better life in Europe, and calm weather in recent months has encouraged more people, many fleeing war, forced conscription and poverty at home, to make the crossing.

People from Eritrea, Democratic Republic of Congo, Sudan and Algeria were among those rescued over the weekend, the navy said.

The UN refugee agency (UNHCR) had counted 63,600 arrivals on July 4, before this weekend's influx, surpassing the previous record of around 62,000 set in the whole of 2011, year of the "Arab Spring" uprisings.

Despite the better weather, the route is fraught with danger. Forty-five people were found suffocated on a packed fishing boat last week and migrants arriving in Sicily said they had traveled with dozens more who never made it.

Italian Prime Minister Matteo Renzi has called on the European Union for more investment in Mare Nostrum, which costs around 9 million euros ($12.3 million) a month.

The influx of migrants and the cost of the operation has boosted the anti-immigrant Northern League Party in Italy, which had lost voter support in recent years amid corruption scandals.

Renzi has also asked the United Nations to intervene in Libya, where many people pay traffickers more than $1,000 for the perilous passage.