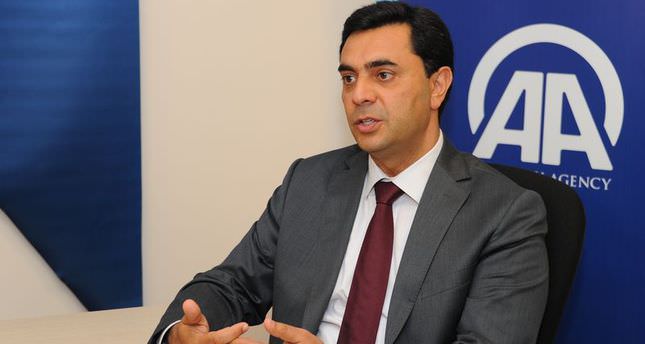 by AA Jul 09, 2014 12:00 am
Talks over the future of Cyprus and efforts to harmonize the Turkish Cypriot side to the EU after possible reunification of the divided island were held on Tuesday between Turkish Cypriot Foreign Minister and Stefan Füle, Head of EC Enlargement Policy.

"We discussed the future of Cyprus peace talks and exchanged views over how to clear the hurdles posed by the Greek Cypriot side regarding EU harmonization projects conducted in the Turkish side of the island," Turkish Cypriot Foreign Minister Özdil Nami told the press following the one-hour meeting in Brussels.

EC President Jose Manuel Barroso announced that the intensified efforts towards advancing the Turkish Cypriot side's accession to the EU was a sign of their "will for a solution" to end the decades-long division of Cyprus.

The Turkish Cypriot and Greek Cypriot leaders announced in February a historic joint declaration outlining the contours of a federal state reuniting the island.

"We have already launched efforts to bring our country in conformity with the EU in a bid to accelerate the normalization of life after a comprehensive solution on the island. We're in cooperation with the EU Commission to make the required legal preparations, establish related infrastructure and educate our bureacrats. There are certain areas where the EU cannot provide the necessary support due to pressure from the Greek Cypriot side. We have decided to continue the EU harmonization process together with Turkey," Nami said.

The top diplomat of the Turkish Republic of Northern Cyprus (TRNC) maintained that they already began benefiting from Turkey's experiences in their path to EU harmonization.

Nami asserted that the Greek Cypriot side is blocking EU projects aimed at preparing TRNC to draw closer to the EU as if it will "give them a leverage on the EU negotiation table."

He termed the Greek Cypriot attitude as "outdated and not serving a comprehensive solution on the island."

However, the more TRNC prepares for EU accession, the easier a comprehensive solution will be attained, Nami asserted.

Nami suggested that the Greek Cypriot authorities, especially at high level, must embark on future-oriented policies by reviewing their "slummed policies" after the historic joint declaration.

Negotiations over Cyprus resumed after a 2004 deal put forward by former U.N. Secretary General Kofi Annan to reunify the Turkish Cypriot and Greek Cypriot communities. The plan was defeated by a no vote in a referendum in the Greek portion of the island whereas Turkish Cypriots voted in favor of the Annan plan.

The Greek Cypriot administration is a member of the European Union and is internationally recognized, except by Turkey, which is the only country that recognizes the TRNC.