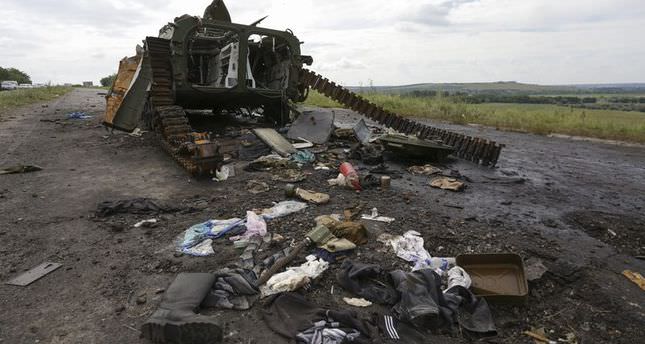 by Jul 10, 2014 12:00 am
Three Ukrainian soldiers have been killed and 27 wounded in clashes with pro-Russian separatist rebels in the east of the country, the military said on Thursday.

Government forces have recently gained the upper hand in the three-month conflict against separatists in the Russian-speaking eastern regions in which more than 200 government troops have been killed as well as hundreds of civilians and rebel fighters.

But though government forces pushed the rebels out of a stronghold in Slaviansk at the weekend, the heavily armed separatists have dug in in Donetsk, a city of 900,000 people, and remain active in and around Luhansk on the Russian border.

The government's "anti-terrorist operation" said that one soldier was killed late on Wednesday when rebels fired machine-guns at a truck carrying soldiers at Muratova near Luhansk.

"The vehicle was ambushed. In the course of the fighting one serviceman was killed and three were wounded," it said in a statement.

Separately, two soldiers were killed and six wounded when their armored vehicle was blown up by a landmine near Chervona Zorya, near Donetsk, it said.

Buoyed by the success in Slaviansk, President Petro Poroshenko is pressing forward with a military offensive against the rebels who are appealing, apparently in vain, for help from Russia, though they say they are recruiting new fighters from among the local population.

Poroshenko has ruled out air strikes and artillery bombardment because of the large civilian population in Donetsk.

His military nonetheless say they have a plan to deliver a "nasty surprise" to the rebels and "liberate" Donetsk and Luhansk. The separatists are occupying administrative buildings in the two cities and have dug into positions on the outskirts of Donetsk.