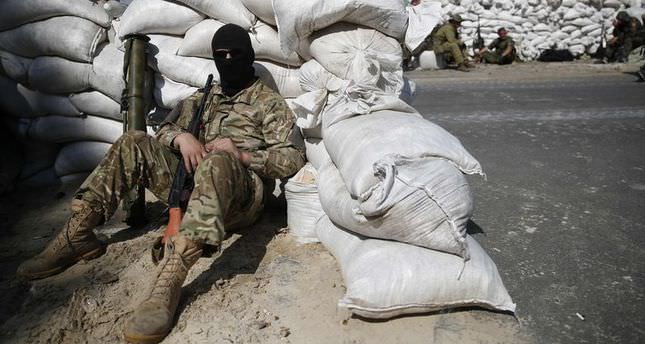 by AA Jul 14, 2014 12:00 am
At least 48 people were killed, and many others were injured, during intense clashes between the Ukrainian army and pro-Russian separatists in eastern Ukraine over the weekend.

At least six civilians were killed Sunday and 10 others injured during clashes in Ukraine's Lugansk region, according to the Lugansk Municipality press service.

Armed pro-Russian separatists, who are dominant in the eastern Ukraine provinces of Lugansk and Donetsk, opened fire on the Ukrainian army's stronghold near the city's bus terminal, local sources told the Anadolu Agency.

The Ukrainian Defense Ministry announced Saturday that 30 separatist fighters had been killed in air strikes.

During the clashes in Petrovsky district, six people died and eight others were injured, according to the Donetsk Health Department.

Supporters of the Kiev government, who were holding flags, have rallied in southeastern port city of Mariupol and in Kharkiv in support of territorial integrity.

A 10-day ceasefire ended June 30, and Ukrainian troops re-launched attacks against pro-Russian separatists in the eastern part of the country. In the rebel stronghold of Slavyansk, where separatists laid siege weeks ago, the Ukrainian army made a major gain by retaking control of the city Saturday.

Conflict has flared in Ukraine since pro-Russian separatists in the eastern part declared their intention to break away from Kiev in March.