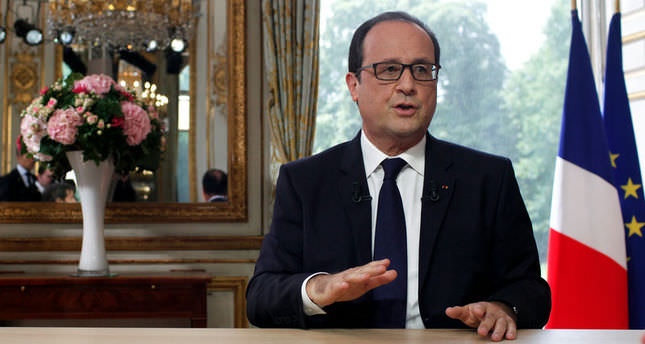 by Associated Press Jul 14, 2014 12:00 am
French President Francois Hollande is urging his partners to talk to Hamas and is pressing Israel for calm, in hopes of achieving a cease-fire in Gaza.

Hollande is trying to use France's diplomatic weight both to stem violence in the Middle East and to keep the unrest from further fueling tensions in France, where pro-Palestinian demonstrators clashed with security officers at a Paris synagogue Sunday.

"Israel has the right to its security; Israel can defend itself if it is attacked; but at the same time Israel should show restraint," Hollande said Monday in an annual televised interview marking Bastille Day, France's national holiday.

Hollande is pushing for a cease-fire and says he is looking for all possible ways to mediate one. He said in recent days he has been trying "to convince those who could have an influence on Hamas, on the Gaza Strip, and at the same time putting pressure on Israel."

Hollande said he didn't want the Israeli-Palestinian conflict to be "imported" to France, and strongly criticized Sunday's scuffles at a Paris synagogue. They came after a largely peaceful protest urging Western leaders to do more to press Israel to stop its strikes.

"We cannot have intrusion or efforts at intrusions into places of worship, whether they are synagogues, as happened yesterday, but I would say the same thing for mosques, for churches, or for temples," he said. "Religions should be respected, all religions. These places of worship should be protected."