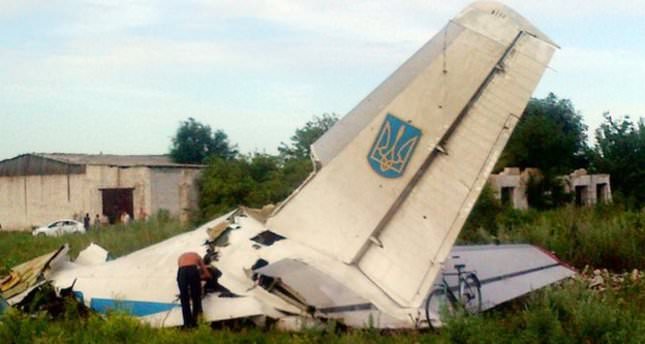 by Jul 14, 2014 12:00 am
Ukraine said a military plane downed over rebel territory on Monday was "likely" shot from Russia after establishing contact with the aircraft's crew, ratcheting up tensions with Moscow along their volatile border.

"Crew members from an AN-26 plane... that was shot down have established contact with the general staff," said a statement on Ukrainian presidency website, without giving details of any casualties.

It said the transport aircraft had been flying too high to be hit by portable missile systems used by the rebels meaning the shots had come "likely from the territory of the Russian Federation".

An AFP crew found the wreckage of the downed plane strewn around a field in the eastern Lugansk region close to the border with Russia and local residents said it had come down shortly after midday with some parachutes spotted in the sky. There was no sign of the eight people on board.

Kiev's accusation will ramp up nerves along the porous border between the two ex-Soviet neighbours -- across which Kiev accuses Moscow of pouring fighters and weapons -- despite Russia saying it was inviting international observers to monitor the frontier.

"As a gesture of goodwill and without waiting for the enforcement of a ceasefire regime, the Russian side is inviting OSCE observers to the Gukovo and Donetsk border posts on the Russian-Ukrainian border," Russia's foreign ministry said in a statement. Tensions had already soared after a shell reportedly from the Ukrainian side killed a Russian civilian on Sunday.

The foreign ministry in Moscow warned that Kiev risked "irreversible consequences" and a report in respected daily Kommersant cited a source close to the Kremlin as saying Russia was weighing up "targeted retaliatory strikes" against Ukrainian positions. President Vladimir Putin's spokesman Dmitry Peskov however dismissed the report, telling AFP: "I don't comment on this in any way. It's complete nonsense."

Kiev has denied that its forces were behind the shelling and Western-backed President Petro Poroshenko called Sunday on the West to condemn "attacks by Russian soldiers of positions held by Ukrainian servicemen", in a phone conversation with EU Council President Herman van Rompuy.
The downing of the aircraft -- the latest since a military plane was shot down last month killing all 49 on board -- came as Ukrainian forces claimed to be making gains around the key rebel stronghold of Lugansk.

Poroshenko said government forces had managed to break through a blockade by pro-Moscow rebels to reach soldiers camped out at the strategic airport in the insurgent-held bastion.

An AFP journalist saw the burned-out wreckage of three unidentified armoured vehicles along the road to the airport, while Kiev's defence minsitry said that five airstrikes had been carried out overnight on rebel positions.

Lugansk is the capital of one of the rebels' two self-declared "People's Republics" and -- along with million-strong Donetsk -- now finds itself in the crosshairs of Kiev's reinvigorated military push to quash the three-month insurgency tearing apart the ex-Soviet state.

Local authorities said three people were killed and 14 wounded in various incidents around the city over the last 24 hours, adding to a bloody weekend that saw one of the highest two-day civilian tolls so far in the conflict that has now claimed some 550 lives.

Poroshenko has previously vowed to kill "hundreds" of gunmen for every lost soldier and ordered an airtight military blockade of Lugansk and Donetsk.

European leaders responded by joining forces with Putin in a bid to persuade Poroshenko to put the brakes on a conflict first sparked by the February ouster of a Kremlin-backed president and fanned by Russia's subsequent seizure of Crimea.

Hopes of a truce rested on a meeting between Putin and Poroshenko -- the second since the Ukrainian president's May election -- that seemed on the cards on the sidelines of the World Cup final in Rio de Janeiro.

But the Ukrainian presidency said Sunday that Poroshenko was forced to cancel his attendance "considering the situation currently happening in Ukraine".

Putin instead met German Chancellor Angela Merkel for talks the Kremlin said ended with a call on the warring sides to issue "a statement as soon as possible concerning a ceasefire, a prisoner swap, and the return of (international) monitors" to eastern Ukraine.
Last Update: Jul 14, 2014 7:18 pm
RELATED TOPICS