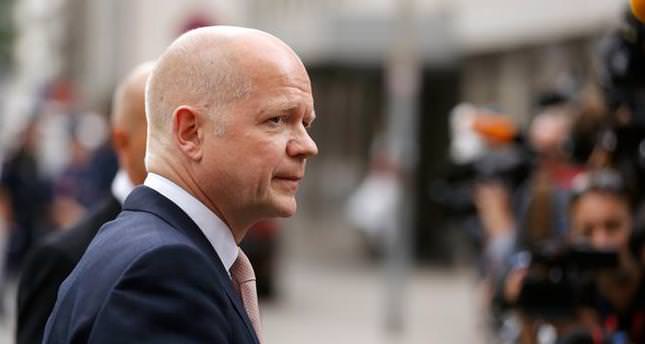 by Jul 15, 2014 12:00 am
British Prime Minister David Cameron on Tuesday pushed through his biggest government shake-up since coming to power in 2010, promoting women and Eurosceptics to senior roles in an appeal to voters in next May's national election.

In one surprise development, William Hague, Britain's most senior diplomat for the past four years, voluntarily stood down allowing Cameron to appoint Philip Hammond, the defence minister and a prominent Eurosceptic, to the influential post.

Michael Gove, a longstanding Cameron ally and one of his party's most prominent right-wing ideologues, was sacked as education secretary.

After last minute adjustments, women will now make up five of the 22-person Cabinet, compared with three before. A further three senior female politicians will also have the right to attend Cabinet meetings, up from two previously.

Other women politicians were promoted to junior ministerial positions.

With his ruling Conservatives trailing the opposition Labour party in opinion polls by up to seven percentage points, the changes were seen as an attempt by Cameron to address criticism that his government was dominated by white, privately-educated middle-aged men.

"This is very much a reshuffle based on the upcoming election. Out with the old, in with the new; an attempt to emphasise diversity and put a few more Eurosceptic faces to the fore," said Matthew Ashton, a politics specialist at Nottingham Trent University.

Hammond's pick as foreign secretary stoked speculation that Cameron was trying to give his part of the coalition a more Eurosceptic tinge to please an unruly wing of the party and to counter an electoral threat from the anti-EU UK Independence Party which won Britain's European elections in May.

The choice of Hammond sends a powerful signal to Britain's European allies. In 2013, he said that if the European Union failed to change and agree new terms for Britain's membership he would rather leave the bloc.

He declined to repeat that opinion when asked on Tuesday, saying he was confident he could help Cameron secure "significant" changes.

Meanwhile, the shake-up, or reshuffle as it is traditionally known, saw Ken Clarke, a minister without portfolio and the Conservative's government's most pro-EU member, sacked.

Cameron has promised to try to reshape Britain's EU ties if re-elected next year before giving voters a membership referendum, something opinion polls show could be close.

Cameron appointed Jonathan Hill, a lord, to become Britain's next European commissioner. Hill, who is not well-known, had previously coordinated the government's business in the upper house of parliament.

Hill is in favour of holding a referendum in the event of any future transfer of further powers to Brussels, but Nick Clegg, the deputy prime minister and leader of the pro-EU junior coalition Liberal Democrats, had to agree his appointment.

Clegg's aides had previously said he would not approve anyone with overly strong Eurosceptic views. But Hill may struggle to get a prime portfolio on the Commission.

George Osborne, the finance minister and one of Cameron's closest allies, kept his job, reflecting the fact that his economic stewardship is seen as a potential election winner.

Michael Fallon, formerly a junior energy minister and someone who has said his party should campaign for Britain to leave the EU if it doesn't get major reforms, was appointed as the country's new defence secretary.

One of the biggest surprises for Britons, however, was Cameron's decision to sack Gove, whose radical reforms to the education sector have provoked anger among teachers.

He will instead become the Conservative party's chief whip, a role that entails ensuring lawmakers vote in the way the party leadership wants.

Hague, the outgoing foreign minister, will assume a more junior role that will involve him coordinating the government's business in the lower house of parliament. He said he would also step down as a member of parliament in May next year.

Nicky Morgan, minister for women and equalities, was appointed education secretary, while Liz Truss was appointed as secretary of state for environment, food and rural affairs in the place of Owen Paterson.

The Labour party has repeatedly criticised Cameron for what it says is his "women problem" - a relative lack of females in top cabinet jobs.

Labour on Tuesday said Cameron had not promoted enough women and called his jobs reshuffle the "massacre of the moderates," saying the changes reflected his failure to reform his party.

"In a desperate attempt to shore up his support within his own Party, he undertakes a reshuffle which has seen centrists kicked out while right-wingers have been promoted," it said.

"This massacre of the moderates shows the extent of David Cameron's weakness."