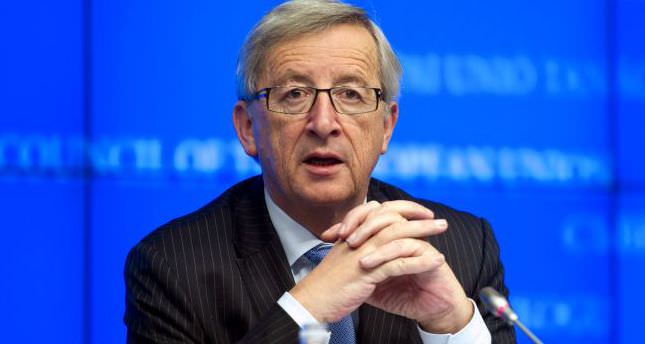 by daily sabah Jul 16, 2014 12:00 am
Despite stiff opposition earlier from Britain and Hungary at the June summit, the former Luxembourg Prime Minister Jean-Claude Juncker was elected yesterday to head the European Commission for the next five years after receiving significant support from a broad majority of pro-European Union lawmakers.

The EU Parliament has voted 422-250 in favor of Jean-Claude Juncker's nomination as the next president of the commission. "I think that with [this] result, a fundamental change of direction has been achieved in the structures of the European Union," said the European Parliament President Martin Schulz who competed against the former PM Juncker for the commission post.

Before his election, the head of the EU Commission, Juncker, addressed the EU Parliament yesterday making some significant remarks that included a five-year freeze on further EU expansion and a revival of both Europe's economy and spirit.

Speaking at the EU Parliament leading up to a confirmation vote, Juncker stated that "there will be no new enlargement in the next five years… The EU needs to mark a pause in its enlargement process so that we can consolidate what has been done with the 28," he said. Pointing out the EU's unassertive foreign policy, he urged national foreign ministries for a stronger EU presence in the international arena. The commission president also called on the strengthening of partnerships with eastern countries, such as Ukraine and Moldova.

Britain's disenchantment with Juncker's candidacy has paralyzed the process of the nomination for the most powerful post in Brussels. As a fervent supporter of deeper European integration, he has played a crucial role in the complex project of introducing the euro to EU member states. Having a long career at the heart of EU politics, Juncker has been at the center of a battle between Germany and Britain.

While German Chancellor Angela Merkel has given her full support to Juncker for the job along with the support of center-left leaders, British Prime Minister David Cameron has scorned Juncker's candidacy. Juncker will take office on November 1st after the incumbent President José Manuel Barroso's mandate expires.
Last Update: Jul 16, 2014 12:25 pm
RELATED TOPICS