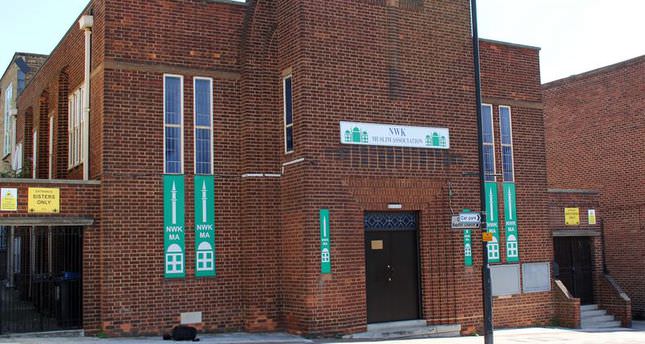 by AA
Jul 17, 2014 12:00 am
A Muslim worshipper has told Anadolu Agency of the disturbing moments when members of a far-right group stormed a mosque in south London.

Worshipper Mohammed Luthful Wahid told AA on Wednesday that he found himself confronted by five members of the Britain First group after they entered the Crayford Mosque and demanded the removal of what they called "sexist" signs - designating separate entrances for women and men - from outside of the building.

Wahid, who is 69-years-old, said: "To be honest with you, I was nervous and worried."

The group, which posted a video of its invasion on the Britain First Facebook group, had marched into the North West Kent Muslim Association mosque on Sunday, trampled on the prayer area without removing their shoes and demanded to speak to the Imam, who was not present.

In the video, the leader of the group, Paul Golding, approached Wahid and said: "We're Britain First, yeah? We object to your signs that are outside, the signs for men and women… in this country we have equality."

Wahid told AA: "We are Muslims, we are not aggressive.

He said the three worshippers in the mosque at the time were left feeling shocked.

In the video, when asked to remove his shoes, Golding responds: "When you respect women, we'll respect your mosques and you've got signs out there that segregate men and women."

Wahid can be heard in the video saying: "Please get out."

Before leaving the mosque, Golding and his associates demanded that a Christian cross engraved into the brickwork on the outside of the building - a former Methodist church which was only opened as a mosque in 2008 - be covered up.

Wahid said: "I told them that Jesus is one of our prophets, but the guy kept saying, 'No'.

"Thank God there were only two or three of us in the mosque at the time, if they had come at prayer time, when there are about 20 people, it could have been disastrous."

He said: "If they had come at a different time, when there are more people here, it would have been very different.

"I would have thrown them out of the mosque."

The Metropolitan police said in a statement they had been called to a "disturbance" at the mosque, adding: "The incident has been investigated by detectives to establish whether any offences have been committed or not.

"Inquiries are continuing and no arrests have been made."

Britain First said in a statement on its website the "Britain First Kent battalion" had gone to the mosque "to inform the Imams that they have exactly seven days to remove sexist, segregationist signs from outside their building - or we will".

"With further operations against the mosque in planning, we expect this campaign to receive further coverage," it said.

The group has also targeted the East London mosque and mounted "Christian Patrols" in East London.

Britain First was established in 2010 by former British National Party members who had split from the original organization.