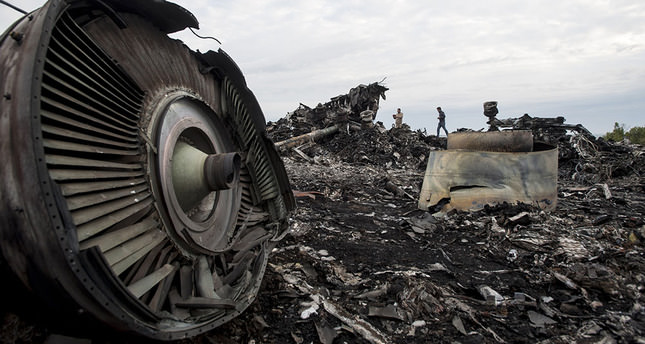 by AA Jul 19, 2014 12:00 am
Ukrainian rescue workers have found as many as 186 bodies at the site of the Malaysian passenger jet crash in eastern Ukraine, state emergency officials confirmed Saturday.


The Malaysian airliner -- with 283 passengers and 15 crewmembers on board -- was flying from Amsterdam to Kuala Lumpur before coming down on Thursday morning.
"186 bodies have been recovered so far during rescue operations conducted in an area covering 18 km of a total 25 km of the site," a statement from the State Emergency Service of Ukraine said.
The emergency officials claimed that Russian separatists in the region were hampering search operations carried out by 188 rescue workers including divers.
A 20 km area at the crash site had been announced as "safe zone" to carry out the search and investigation processes properly after an agreement with pro-Russian separatists, according to Valentin Nalivaychenko, head of the Ukrainian Security Council.
Meanwhile, Dutch Foreign Ministry has announced that of the 298 people on the plane 193 were from the Netherlands.
The Malaysia Airlines had confirmed on Friday that of the 298 people on board 44 were from Malaysia, 27 from Australia, 12 from Indonesia, nine from the United Kingdom, four each from Belgium and Germany, three from the Philippines, and one each from Canada and New Zealand, respectively.
Separately, Turkish President Abdullah Gul has offered his condolences to Dutch and Malaysian monarchs Willem-Alexander and Tuanku Abdul Halim Mu'azam Shah.
"On behalf of the Turkish people and myself, I extend my sincere condolences both to the relatives of those killed in the crash and the Dutch and Malaysian people," Gul said Saturday.
Last Update: Jul 19, 2014 3:37 pm
RELATED TOPICS