Tens of thousands march for Gaza in London, clashes in Paris 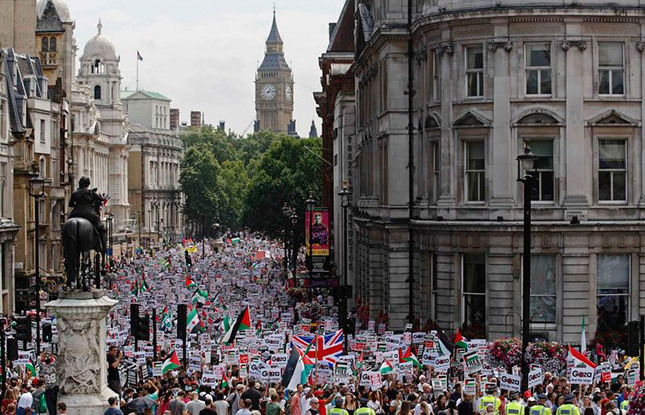 by Anadolu Agency Jul 19, 2014 12:00 am
About 100,000 protestors from across Britain have rallied in London to protest against Israel's onslaught on Gaza, according to demonstration organizers Stop the War coalition, while in Paris a banned demonstration descended into violence.

Organisers of the London rally claimed that "tens of thousands" of people joined the march from Prime Minister David Cameron's office to the Israeli embassy, many of them chanting "Israel is a terror state".

Police refused to give an estimate for the number present but several roads through the centre of the capital were closed during the three-mile (4.8-kilometre) march, which passed off peacefully. 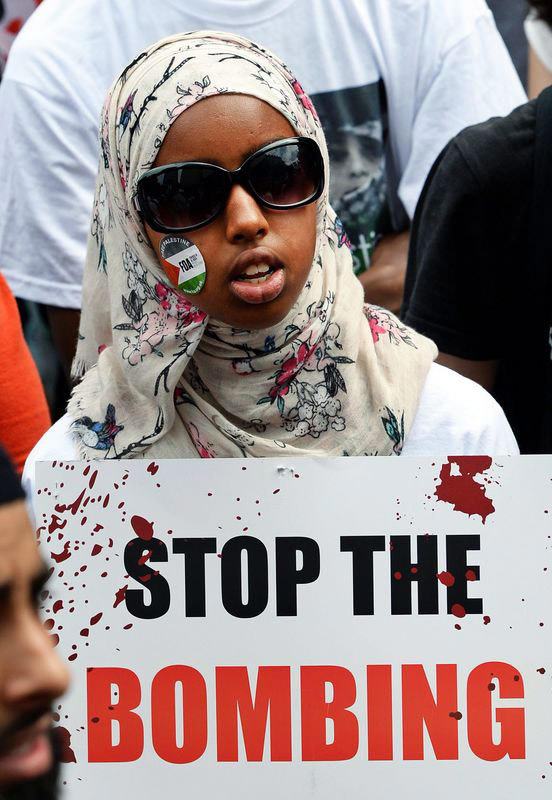 In Paris, by contrast, clashes broke out after hundreds gathered in defiance of a ban on their demonstration, with crowds throwing stones and bottles at riot police, who responded with tear gas.

Some 33 people were arrested by early evening, a police source said, while three police officers were injured in the disorder near Montmartre in the north of the French capital.

Protests were permitted in other French cities, where thousands turned out including in Lyon, Marseille and Strasbourg, while several thousand also rallied in solidarity with the Palestinians in Brussels.

Twelve days of violence between Israeli forces and Hamas has seen more than 340 Palestinians killed in Gaza, the majority of them civilians, as well as five Israelis.

In London, demonstrators held up placards pleading for Israel to end its attacks on Gaza, and reading "Stop the bombing, free Palestine" and "End Israeli apartheid".

The left-wing Stop the War Coalition, one of the organisers of the march, condemned British and US support for Israel as "nothing less than collusion with war crimes killing women, children and disabled people".

Sarah Colborne, director of the Palestine Solidarity Campaign, said the five-hour demonstration was a "chance to say enough is enough: Israel's siege of Gaza and its occupation of Palestinian land has to end now".

In Paris, police had banned Saturday's demonstration following violence after similar marches -- a move that was widely criticised by those taking part in London.

Hundreds of people, including many women and children, took to the streets regardless, and there were cheers as two Israeli flags were burned in front of the crowd.

"We are all Palestinians," chanted the protesters. Some threw stones at the cordons of riot police before running off, starting a game of cat and mouse with police.

In the resulting running clashes, two small vans were set on fire, as well as numerous bins, while the streets were littered with broken glass and debris.

A protest against Israel's offensive in Gaza last Sunday in Paris also descended into unrest and a small group of people tried to break into two synagogues.

Speaking on Friday about the ban on this weekend's march, President Francois Hollande said: "We cannot allow the conflict to be imported into France.

"We cannot have demonstrators facing each other down, with a risk to public order."

The US embassy had issued a statement "strongly encouraging" its citizens to steer clear of the Paris protests, warning of the risk of clashes.

Authorities said organisers who defied the ban will face a six-month prison term and 7,500-euro fine.