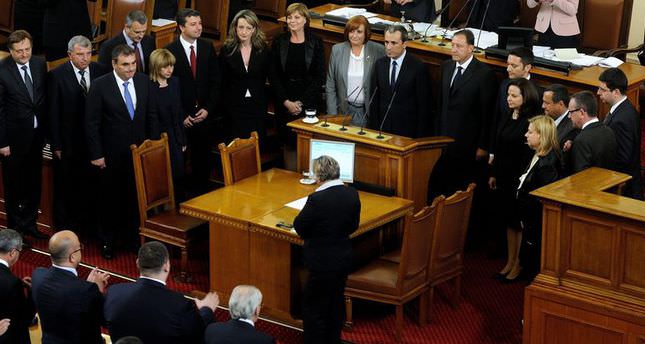 by French Press Agency - AFP
Jul 23, 2014 12:00 am
Bulgaria's Socialists-backed Prime Minister Plamen Oresharski handed in the resignation of his cabinet Wednesday ahead of snap elections that will seek to end months of political turmoil in the European Union's poorest country.
"The resignation of the cabinet of Prime Minister Plamen Oresharski was tabled in parliament at 5:59 pm (0259 GMT) Wednesday," the parliamentary press office said in a statement.
The legislature is expected to approve it on Thursday.
The days of Oresharski's minority cabinet were numbered after it lost the backing of a key ally in the legislature -- the Turkish minority MRF party -- in late June and the Socialists agreed on a snap vote set for October 5.
Oresharski's government is the second to collapse in less than 18 months after the resignation of the previous right-wing GERB cabinet in February 2013 following months of sometimes violent anti-poverty demonstrations.
Dogged by renewed street protests and instability, the cabinet refrained from launching much needed reforms of the healthcare and pension systems, while a series of other controversial nominations in the public sector and the judiciary heightened people's perceptions about cronyism and corruption.
The country's small and open economy meanwhile continued to battle with sluggish economic growth, outflow of investors, falling budget revenues, persistent deflation and rising unemployment.
Runs on Bulgaria's third- and fourth-largest private lenders -- First Investment Bank and Corporate Commercial Bank (CCB) -- last month added to Oresharski's troubles.
Urgent measures by the central BNB bank managed to avert a full-blown banking crisis but might eventually see CCB go bankrupt as the BNB governor also came under pressure to resign and expressed readiness on Tuesday to step down.
Bulgaria's constitution now requires President Rosen Plevneliev to give the three biggest parties in parliament the chance to form a new government before dissolving parliament and appointing a caretaker cabinet to organise the October 5 vote.
Last Update: Jul 23, 2014 8:41 pm