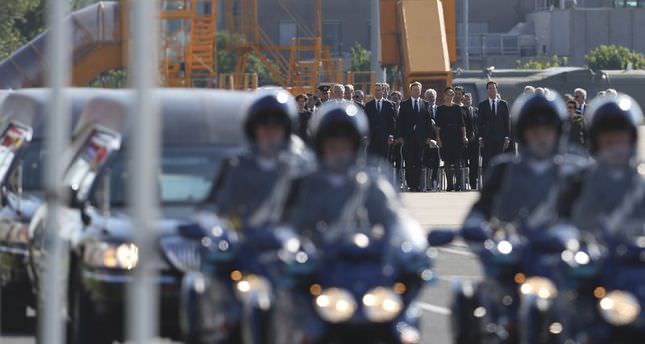 by Jul 23, 2014 12:00 am
The bodies of the first victims from a Malaysian airliner shot down over Ukraine last week arrived on Wednesday at a military base in the Netherlands - a nation in shock and sorrow.
Bells pealed and flags flew at half mast in memory of the 298 people killed when flight MH17 came down in an area of eastern Ukraine held by Russian-backed separatists, in the first national day of mourning since wartime Queen Wilhelmina died in 1962. King Willem-Alexander and Prime Minister Mark Rutte joined dignitaries on the tarmac as two military aircraft carrying 40 plain wooden coffins landed at Eindhoven in the southern Netherlands.

Thousands of people lined the 100 km (62 mile) route, watching from motorway bridges as the cortege travelled from Eindhoven to the military base at Hilversum where the bodies will remain until they can be identified, a task that could take months.


Dutch authorities are leading the investigation, with extensive help from other countries.
The plane's black box flight recorders, handed over by the rebels' leader, were flown from Ukraine on a Belgian military aircraft on Tuesday to Britain, where a team of experts examined the Cockpit Voice Recorder on Wednesday, finding no evidence that it has been tampered with.
Australian Prime Minister Tony Abbott said it was unclear how many bodies had been transported to Kharkiv and how may have been left behind at the crash site.
Rutte, thrust into an unaccustomed spotlight, said on Tuesday the disaster had fundamentally changed the way the Dutch view Russia, urging the European Union to unite behind a firm approach to force Moscow to cooperate with the investigation.
He has spoken almost daily with U.S. President Barack Obama, Russian President Vladimir Putin and other European leaders to coordinate the return of the bodies and discuss the investigation and the consequences.
With U.S. intelligence pointing to the aircraft having been shot down accidentally by the Moscow-backed separatists, the Dutch mood of sorrow is now mixed with indignation.
The loss of life has few parallels in recent Dutch history. More than 200 Dutch citizens died in the 1977 Tenerife airport disaster, in which two fully loaded Boeing 747s collided on the ground killing 583 in the world's worst civil aviation disaster.
The worst post-war disaster in the Netherlands occurred in 1953, when the North Sea flooded low-lying eastern areas one stormy night, sweeping over dikes to take more than 1,800 lives.