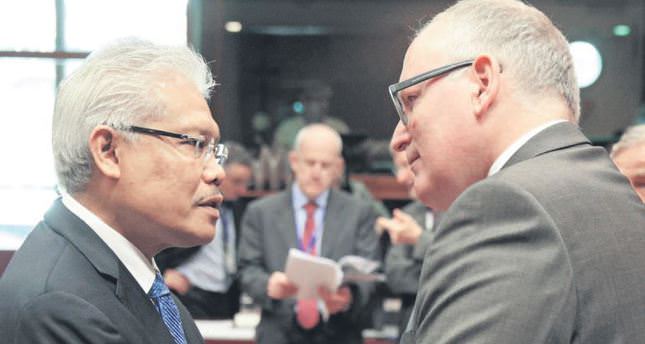 EU leaders are set to introduce tough financial sanctions to step up the pressure on Russia, leading Russian businessmen to move their assets out of the U.K.

Following the Council of Foreign Ministers meeting in Brussels, EU leaders reached an agreement over tightening sanctions on Russia with the aim of damaging the Russian economy.

As the EU leaders drew a list of Russian oligarchs from Russian President Vladimir Putin's inner circle, some Russians reportedly have moved their money out of London in an attempt to escape the EU's tougher sanctions, the Telegraph reported yesterday morning.

10 Downing Street confirmed that Russian businessmen were "moving money out of London" after EU leaders announced the stepping up of sanctions against Russia, as reported yesterday in the Telegraph. "The measures that have been taken with regard to individuals and entities have got a correlation with some of the financial flows we have seen across Europe including here in London. That's certainly the case," U.K. Prime Minister David Cameron's official spokesman told the Telegraph.

Despite the U.K.'s heavy pressure to impose an "absolute arms embargo" on Russia, the latest reports show that the U.K. is continuing to export many weapons and military equipment including missile- launching equipment to Russia. According to a British parliamentary report released yesterday, there have been 251 licenses in place for the sale to Russia of military equipment worth at least 132 million pounds (TL 471 million), as Agence France-Presse reported.

After the EU agreement at Tuesday's meeting, EU leaders announced yesterday the first names on the list of Russian oligarchs targeted by the new sanctions. The owners of some large Russian enterprises close to President Putin such as Novatek, Gazprombank and many others have already been the main targets for both EU and U.S. sanctions.

Meanwhile, Ukraine announced a list of Russian individuals and companies who support rebel groups in eastern Ukraine directly or indirectly would be covered by the punitive measures, said Ukrainian Prime Minister Arseny Yatseniuk in a yesterday's ministerial meeting. "I instruct the committee to propose for the government's consideration a list of individual and sector sanctions on Russian citizens and legal entities supporting and financing terrorism in Ukraine in 10 days," said Ukranian PM.

Britain, along with the U.S., has been pushing the EU to impose stronger measures against Russia in order to disrupt the Russian economy as a whole.

Cameron has welcomed the EU agreement while calling for "Tier 3" sanctions, hard-hitting sanctions aimed at hitting the Russian gas and oil industry and imposing an arms embargo. EU officials are expected to meet today to discuss imposing "Tier 3" sanctions.

The existing EU sanctions against Russia have been considered "relatively mild" compared to "Tier 3" sanctions. The existing "Tier 2" sanctions have imposed travel bans and asset freezes on specific Russian businesses, individuals and organizations in Putin's inner circle in response to the annexation of Crimea and the ongoing crisis in eastern Ukraine. European leaders, with "Tier 3" sanctions, aim to block Russian access to European markets for whole sectors of the Russian economy, mainly gas and oil.

Considering EU's technical support to Russia for the development of Arctic oil and gas fields, "If [Russia doesn't] decisively try to do something to prevent escalation, then there is no reason for us to help promote the growth of their industry and develop new resources for gas and oil and therefore to put this equipment on the list of sanctions," said EU Energy Commissioner Guenther Oettinger yesterday in a news conference, as Reuters reported.

While Russia faces more rigorous EU sanctions, pro-Russian separatist groups yesterday reportedly left their positions on the outskirts of the city of Donetsk in eastern Ukraine, Ukrainian military official said, according to Reuters. "In Donetsk, rebels abandoned their positions en masse and went toward the central part of the city," a statement from the headquarters of Ukraine's anti-terrorist operation said, while Ukrainian forces tried to squeeze the rebels out in order to gain more significant ground in eastern Ukraine.