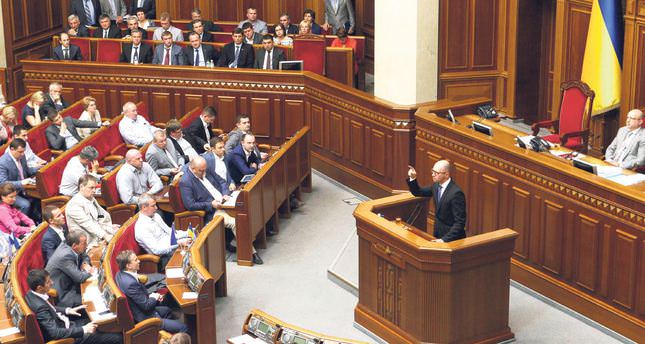 In the midst of a conflict with Russia, Ukraine sought to avoid political turmoil following the resignation of the country's prime minister and has announced early parliamentary elections

The shock resignation of Prime Minister Arseniy Yatsenyuk has caused political uncertainty to add to the crisis already wracking Ukraine. Leaders in the country have been trying to avoid political deadlock, as fighting between the army and rebels close to the Malaysia Airlines Flight 17 crash site claimed over a dozen more lives. Ukraine's cabinet yesterday elevated Deputy Prime Minister Volodymyr Groysman - who has been coordinating Kiev's response to the downing of the Malaysian jetliner in east Ukraine - to the post of acting premier. President Petro Poroshenko called on parliament to heed to "cold reason" and pass a vote of confidence in the government.

"I hope that the strong emotions will calm down and be trumped by cold reason and a sense of responsibility and that the entire Ukrainian cabinet will continue its work," Poroshenko said in a statement released late Thursday. The breakup of the parliamentary majority gives the president the right over the next month to announce a fresh parliamentary election, which has been in the cards since Kremlinbacked leader Viktor Yanukovych's toppling.

Yatsenyuk quit in protest Thursday after the ruling European Choice coalition collapsed following the withdrawal of several parties, a move that paved the way for long-awaited parliamentary polls to be announced. "I announce my resignation in connection with the dissolution of the parliamentary coalition and the blocking of government initiatives," Yatsenyuk said on Thursday.

Ukraine's parliament said yesterday it had yet to receive a resignation letter from Prime Minister Arseny Yatseniuk, meaning it could not vote on whether to accept it, stalling work at the heart of the government. Speaker of the Parliament Oleksander Turchinov said Yatseniuk's letter of resignation had been sent from the government but had yet to be received by parliament. An aide to President Petro Poroshenko, Oleksander Danilyuk, said the resignation should not hurt what Kiev calls its "anti-terrorist operation" against rebels in eastern Ukraine.

Pro-Western Yatsenyuk, who helped steer the country through upheaval since the ouster of Yanukovych in February, lashed out at the decision to pull the plug on the coalition as Kiev is struggling to end a bloody separatist insurrection tearing apart the east.

While the civil war rages on in the east, politicians in Kiev were locked in a fierce debate over Yatsenyuk's abrupt resignation, with the UDAR (Punch) party of boxing champion Vitali Klitschko insisting that the premier stay on until early parliamentary elections are held.

Together with a few other parties, UDAR announced Thursday it was exiting the governing coalition - a move that sparked Yatsenyuk's resignation and triggered the possible announcement of new legislative polls expected this fall.

The Fatherland faction of ex-prime minister Yulia Tymoshenko condemned the coalition's collapse, saying it "opens up a second front" in the country as it battles to quell the insurgency in the east. "Between peace and chaos, Ukraine unfortunately is choosing political chaos," said the party in a statement read out by one of its lawmakers in parliament.

The government's offensive to regain control of Ukraine's eastern industrial heartland was given a boost yesterday when its forces took the strategically-important city of Lysychansk.

Artillery fire echoed around the rebel stronghold of Donetsk on Friday for the third day, as rebels fortified defenses and Ukrainian troops moved to squeeze them. Local health officials said 14 people have been killed in the last 24 hours in the Donetsk region. At the same time, it reported losing 13 soldiers in the past 24 hours.
Last Update: Jul 26, 2014 1:02 am
RELATED TOPICS