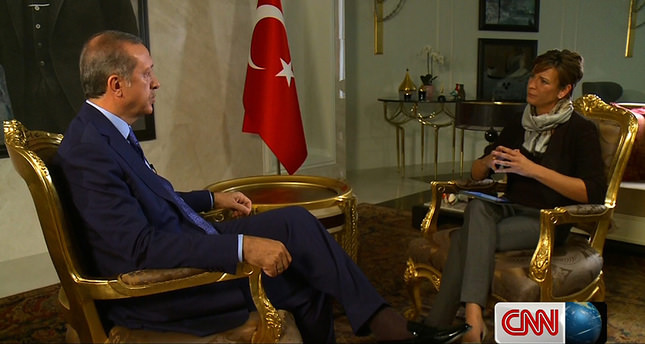 by AA Jul 28, 2014 12:00 am
Israel's failure to open a humanitarian corridor allowing aid and food for the besieged civilians in Gaza means that their willingness to "sincerely" participate in any temporary ceasefire should be questioned, said Turkey's Prime Minister and presidential candidate Sunday in an interview with 'Kanal 7' television channel.

"Israel continuously changes its tone and actually Hamas also does not trust its tactics. You ask to sign a ceasefire agreement on one hand and when we declare ceasefire Israel resumes its attacks", Recep Tayyip Erdoğan said.

"We have asked for a week long temporary ceasefire in Gaza and an air bridge is among the conditions of a ceasefire."

Over a thousand Palestinians have been killed and more than 6000 others injured in relentless Israeli attacks since July 7.

Erdoğan went on to criticize Egypt's President, General Abdul Fattah Al-Sisi for not helping the people of Gaza.

"We do not trust the sincerity of Egypt either because it erects roadblocks instead of helping the Palestinians in Gaza and hinders aid organizations intending to go for humanitarian help in Gaza", he said.

Earlier this month, Erdoğan described Egypt's Al-Sisi as a "tyrant".

"I do not consider al-Sisi a democrat, as he alleges. I also don't view him as a president. He is a tyrant, and I have no doubts about this," Erdoğan told CNN.

Regarding the 49 Turkish consulate staff detained by ISIL (Islamic State of Iraq and the Levant) in the Iraqi city of Mosul six weeks ago Erdoğan said, "We are continually monitoring the situation and exerting efforts with all due sensitivity to safely bring our citizens home. The delay and our sensitivity is because of our concerns about the safety of our citizens."