New economic sanctions on Russia imposed by EU and US 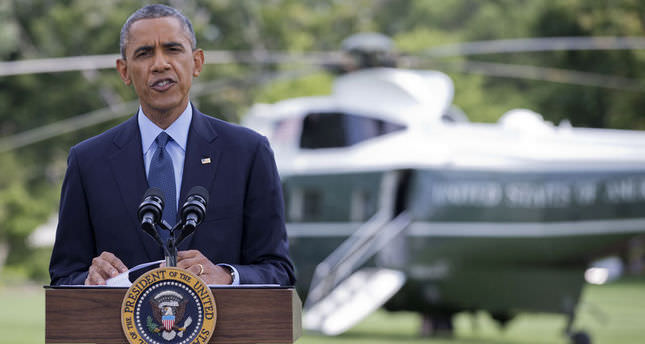 New economic sanctions on Russia imposed by EU and US

The European Union and the United States on Tuesday announced further sanctions against Russia, targeting its energy, banking and defense sectors in the strongest international action yet over Moscow's support for rebels in eastern Ukraine.

The measures mark the start of a new phase in the biggest confrontation between Moscow and the West since the Cold War, which worsened dramatically after the downing of Malaysian flight MH17 over rebel-held territory on July 17 by what Western countries say was a Russian-supplied missile.

"If Russia continues on this current path, the costs on Russia will continue to grow," President Barack Obama said in Washington.

"Russia's actions in Ukraine and the sanctions that we've already imposed have made a weak Russian economy even weaker," he said.

In Brussels, diplomats said ambassadors from the 28-member European bloc agreed to restrictions on trade of equipment for the oil and defense sectors, and "dual use" technology with both defense and civilian purposes. Russia's state run banks would be barred from raising funds in European capital markets. The measures would be reviewed in three months.

German Chancellor Angela Merkel, who had been reluctant to step up sanctions before the crash because of her country's trade links with Russia, said the latest EU measures were "unavoidable".

Previously Europe had imposed sanctions only on individuals and organizations accused of direct involvement in threatening Ukraine, and had shied away from wider "sectoral sanctions" designed to damage its biggest energy supplier.

The new measures were coordinated with Washington in the hope that Russian President Vladimir Putin will back down from a months-long campaign to seize territory and disrupt Ukraine, whose pro-Moscow leader was toppled in February.

But Putin has shown no sign of backing down. Indeed, despite the international condemnation following the downing of the airliner, Western countries say the Kremlin has stepped up support for separatists by sending them more heavy weaponry.

Moscow denies it is arming the rebels, protestations that are ridiculed in the West.

On the ground on Tuesday, intense fighting between government troops and pro-Russian rebels killed dozens of civilians, soldiers and rebels over the past 24 hours, as Kiev pressed on with an offensive to defeat the Moscow-backed revolt.

Shells hit the center of Donetsk, a city with a pre-war population of nearly a million people where residents fear they will be trapped on a battlefield between advancing Ukrainian troops and Russian-backed rebels who have vowed to make a stand.

Ukrainian forces have been pushing rebel units back toward their two main urban strongholds of Donetsk and Luhansk and have sought to encircle them in several places.

The government says its forces have retaken several villages in the rolling countryside near where the airliner crashed, killing all 298 passengers, most of them Dutch.

In Donetsk, the body of a dead man lay in rubble behind a badly damaged 10-storey residential building close to the city center, hit by shelling. Rebels at the scene placed body parts on a nylon sheet and carried it on a stretcher to a green van.

Another middle-aged woman, who gave her name as Katarina, charged out of the building next door carrying two bags.

"No more! I cannot live in this death row any more!" she said. "I am leaving! I don't know where!"

Donetsk officials said two people were killed in the shelling of the city.

Municipal officials said up to 17 people, including children, were killed in fighting on Monday evening in the town of Horlivka, a rebel stronghold north of Donetsk that saw fierce battles between the rival forces in the last few days.

In the city of Luhansk, officials said five civilians were killed when shelling hit a retirement home.

"The enemy is throwing everything it has into the battle to complete encirclement of the DNR," Igor Strelkov, a Muscovite rebel commander, told journalists in Donetsk on Monday evening, referring to the self-proclaimed "Donetsk People's Republic".

A rebel source in Donetsk said reinforcements including military equipment and fighters had arrived across the border from Russia. Reuters was not able to confirm that independently.

A spokesman for Ukraine's Security Council, Andriy Lysenko, blamed Russia for shelling a Ukrainian border crossing point and military positions from across the border to help the rebels. Moscow has also accused Ukraine of firing across the frontier.

Washington says the airliner was almost certainly shot down accidentally by rebels using a Russian missile.

Leaders of the United States and major European powers agreed in a teleconference on Monday to impose sanctions on Russia's banking, technology and arms sectors.

The U.S. Treasury imposed sanctions on more Russian banks, targeting VTB, the Bank of Moscow, and the Russian Agriculture Bank, as well as the United Shipbuilding Corp.

Winning support from the EU for sanctions was the trickier task, because the European bloc does more than 10 times as much trade with Russia as the United States does and its 28 member states must agree unanimously on any measures.

To mitigate the impact on Europe's own economy, the new sanctions will not affect previous contracts, which means France will be allowed to go ahead with delivery of a naval helicopter carrier it has already sold to Russia. Russia's oil industry has been targeted but its natural gas, which powers European industry and lights its cities, has been spared.

Still, some European countries and companies will face real pain. British energy giant BP, the biggest foreign investor in Russia with a near 20 percent stake in Russia's biggest oil company Rosneft, complained its business could be hurt.

London's financial services hub could face disproportionate harm from measures against Russian banks. German manufacturing firms could lose customers. European banks and other creditors that are owed money by Russians may face a greater risk that clients will have trouble refinancing or repaying their loans.

"These sanctions are harder than anything we have ever had before," said James Nixey of British think tank Chatham House. "It will hurt a little bit but it's a down payment on the future security of Europe. It's a question of Western credibility."

Meanwhile on the ground, fighting has only intensified since the air crash, with Ukrainian government forces trying to press on with an offensive that saw them push rebels out of their bastion of Slaviansk at the start of the month.

Rebels who retreated from Slaviansk to Donetsk say they will make a stand inside the city. Fighting has also intensified in towns and villages near the border, where the government aims to block rebel reinforcements and arms shipments from Russia.

Plans to open a humanitarian corridor in Luhansk to allow residents to flee the fighting failed. The United Nations says more than 100,000 people have already fled the east so far.

Violence in the region also frustrated international experts' efforts to access the plane crash site for a third day. A Dutch police mission said it abandoned plans to travel there on Tuesday because of fighting along the route.

Fighting has impeded recovery of some of the remains from flight MH17 and made it impossible to reach the site to investigate the cause of the crash. Kiev and the rebels accuse each other of fighting in the area to keep inspectors away.