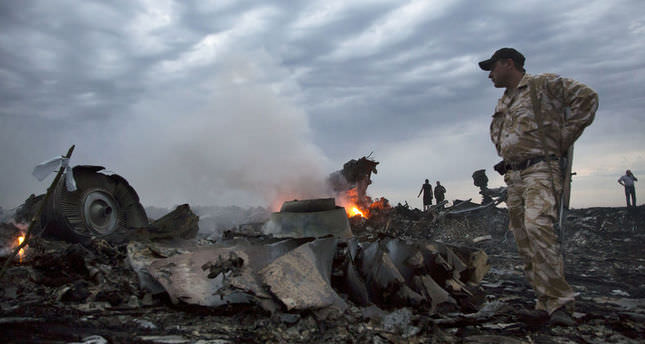 by AA
Jul 31, 2014 12:00 am
Pro-Russian separatists downed a Ukrainian military plane in the eastern region of Donetsk, Ukrainian media said on Wednesday.

The plane was reportedly shot down above the town of Kharchizska in Donetsk. Eight soldiers managed to parachute out of the plane, witnesses were quoted as saying.

Officials from the self-proclaimed Donetsk People's Republic have yet to confirm the incident.

The downing of the plane came days after pro-Russian separatists shot down two Ukrainian military planes, both Sukhoi Su-25 attack aircrafts, in the eastern region on July 23.

The downing of Malaysia flight MH17 last week, which killed 298 people on board, also led to an increase in tensions between Western powers and Russia.

At least 500 people have been killed since the Ukrainian army launched an anti-terror operation against pro-Russian separatists in April.

After Russia annexed Crimea in March following a referendum in the peninsula, pro-Russian separatists, hoping for a repeat scenario, in eastern Ukraine expressed their intention to break away from Kiev
Last Update: Jul 31, 2014 11:42 am