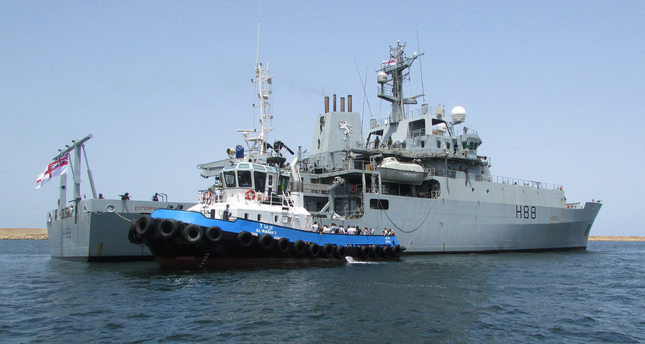 by Associated Press Aug 04, 2014 12:00 am
A British warship that evacuated 110 citizens from Libya arrived in Malta on Monday, bringing the total number of evacuees by ship to the island in the last two days to 361.

The Britons aboard the HMS Enterprise included 30 children and four pregnant women.

Libya is experiencing its worst violence since the 2011 civil war, which toppled Moammar Gadhafi. Armed militias that overthrew Gadhafi are fighting each other for control of the oil-rich country.

In the Philippines, 41 Filipino workers who fled from Libya's turmoil arrived in the capital, Manila, recounting their close brushes with death.

Nearly 1,000 of about 13,000 Filipino workers and their dependents in Libya have returned home since the Philippine government ordered their mandatory evacuation from the conflict-torn country.

"It's a good thing that our (Philippine) embassy evacuated us immediately," said Ariel Nogoy, a 40-year-old Filipino who worked as an electrician in Libya for two years.

"We were able to avoid a bomb that hit our housing barracks. If not, a lot of us would have been killed," Nogoy told The Associated Press at Manila airport.

On Saturday, 226 South Koreans, Indians, Filipinos and Bangladeshis landed in Valletta on a vessel chartered by a car manufacturing company for its employees who wanted to leave Libya. With them were 25 Maltese nationals.