Ukrainian city stocks up as a long siege looms 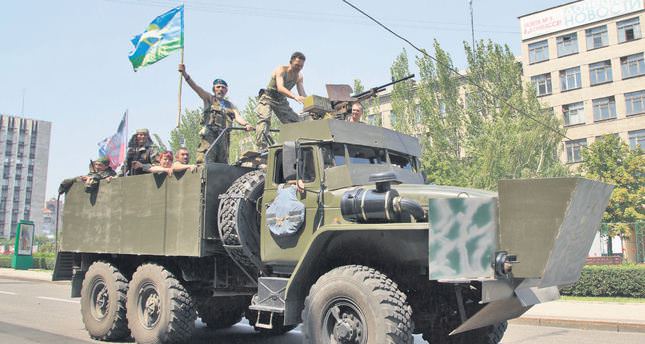 As clashes between the separatists and the Ukrainian army intensify, residents of Donetsk have been hoarding goods and materials in case the situation worsens

Although the streets outside are nearly empty, business has been brisk at Oksana Vsevolodova's grocery store Donetsk as residents prepare for what could be a long siege. People in the east Ukraine city are stocking up flour, canned food, cooking oil, instant coffee, candles and batteries as government forces tighten the noose around pro-Russian separatists occupying the city. "I have done the same as my customers. I store everything in the cellar," Vsevolodova said. "I've also bought three folding beds for myself, my husband and our child. We can't afford to leave the city, we're not that rich." After nearly four months of occupation and violence, the most popular phrase in the city has become: "Live until tomorrow."

The rebels, who took over the Donetsk administration's offices and erected barricades around them in mid-April, are still in charge of the sprawling city, the main hub of the Donbass coal-mining region. But many of the nearly 1 million residents have fled since the Ukrainian army forced rebels out of most towns they had occupied and squeezed them into two main strongholds, Donetsk and nearby Luhansk.

Luhansk, a city of 400,000 before the conflict, is now all but encircled and residents spend much of the time in their cellars because of shelling. Electricity was off for most of the past few days and the last food supply route has been cut. Donetsk is harder to encircle because it is much bigger, but highways out are guarded by rebel roadblocks and surfaceto- surface rockets fired by pro-government forces have rained down on residential tower blocks in the city centre. Several civilians have been killed in shelling in the past two weeks.

The rebels say they will fight to the end, leaving the pro-Western leadership in Kiev facing a dilemma - how to force them out without a bloodbath.
A storm of the city by crack troops appears to have been ruled out: Ukraine has little or no expertise in such missions and it would risk heavy civilian casualties and army losses.

A siege is the most likely option, with the possibility of an escape corridor for the separatist fighters in the hope they may flee - to Russia, if Moscow
will take them, despite denying it arms them. Nearly all of the main separatist leaders and an unknown number of the fighters are from Russia. "The tactic of the Ukrainian armed forces, National Guard and Border Guard Service rules out massive bombardment of populated areas," Andriy Lysenko, a spokesman for Kiev's military operation in the east, told a recent news conference. "We will use only ground forces there which will free the city street by street, block by block." Ukrainian officials say the army does not fire at residential areas and denies it will use the air force against the big cities.

Reuters journalists have seen shells hit residential buildings in central Donetsk, though it was impossible to verify whether fighters were present.
The army has gained the upper hand in the conflict since businessman Petro Poroshenko was elected president in May, three months after his pro-Russian predecessor was ousted following protests over a political about-turn towards Moscow.

The government has intensified its offensive since a Malaysian airliner was downed in rebel-held territory on July 17, killing 298 people. Kiev and the United States say the separatists shot it down with a missile provided by Russia. Moscow and the rebels blame the disaster on Kiev.

Ukrainian officials say there are about 12,000 rebel fighters in the two cities, but some residents say the number could be much higher. It is hard to say how long they can hold out without reinforcements. "It could last for a very long time or it could all collapse overnight. The decision is in Moscow," said a Western official, referring to the West's allegations - denied by Moscow - that Russia is arming the rebels and sending in mercenary fighters.

The United Nations said 1,129 people were killed and nearly 3,500 wounded in east Ukraine between mid-April and July 26. Tens of thousands have been forced to leave their homes.