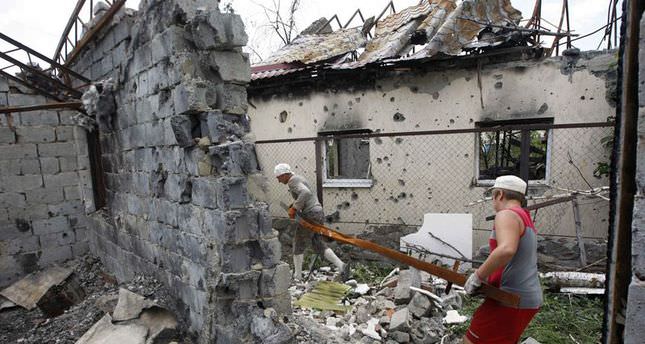 The clashes between Ukrainian security forces and pro-Russian separatists have turned the east of the country into a battle zone where many Ukrainians have been forced to flee the war to other parts of the country or to cross into neighboring Russia. For those that stayed, the humanitarian situation has gotten worse since the "anti-terrorist operation" was launched by the Kiev government several months ago.

According to the United Nations, at least 117,000 people have been displaced by the turmoil in Ukraine since the Russian annexation of Crimea in March. The U.N. Refugee Agency reported that the number of people displaced from the rebel-held Luhansk and Donetsk regions increased from 2,600 in early June to 102,600 in August. "[Since Aug. 1], more than 6,200 people have been forced to leave," the U.N. refugee agency said. Civilians have been heavily affected by the escalating violence, and this number of internally displaced people (IDF) would gradually increase if the war continues. As the situation deteriorates in the east of the country, people from eastern Ukraine now make up 87 per cent of the total displaced population in Ukraine, according to U.N. reports.

As the Ukrainian army prepared to storm eastern cities in order to capture separatist rebels, the Russian Foreign Ministry stressed the worsening situation of the civilian population while calling on the international community for the formation of a humanitarian mission for the Ukrainian crisis. In response, Ukrainian Deputy Ambassador Oleksandr Pavlichenko denied claims over the humanitarian crisis in Ukraine. "The situation is manageable by the government of Ukraine, which remains open to cooperation with international partners," he said.

With numbers increasing due to the ongoing conflict, the U.N. urged the Ukrainian government to establish a central registration system for "the coordination and implementation of relief efforts." "This is also important as the Ukrainian authorities make their preparations for winter. Most of the current shelters in use are not suitable for the cold winter months," a spokesman for the U.N. High Commissioner for Refugees (UNHCR) in Geneva said.

In addition to the IDF, a large number of people sought to arrive and stay in Russia. Some 730,000 people have fled from the violence and crossed into Russia under the visa-free regime. Only 168,000 of them have registered with Russia's federal migration service, according to Russian authorities.

Some Russian refugees were reportedly sent to non-Russian republics of the Russian Federation that are far away from Ukraine. According to Tatar-Bashkir Service reports, up to 5,000 Russian refugees from eastern Ukraine were sent by Russian authorities to Bashkortostan, a Turkic republic thousands of kilometers away from Ukraine. Russia reiterated that it wants a "humanitarian mission" deployed in eastern Ukraine.
While the Ukrainian army has made significant gains against the armed separatists in recent weeks, some 4,000 people returned from the Kharkiv region to Slavyansk and Kramatorsk last week. Many consider the alternatives available a better temporary solution in order to return to their homeland in the near future after peace and stability are restored in Ukraine.

As basic services and infrastructure have been heavily affected by the increased violence and houses and buildings destroyed during the heavy clashes, the UN refugee agency signed an agreement with the Donetsk regional authorities to "coordinate the distribution of aid to the most vulnerable displaced people." Luhansk city with its 250,000 remaining inhabitants has been without water or electricity, local authorities told the DPA news agency.

Ukrainian government forces kept up a military offensive to take control of lost territory from pro-Russian separatists with Russian backing. Two civilians were reportedly shot dead during heavy clashes in Donetsk on Tuesday morning. Kiev's military stated that fighter jets had struck at rebel positions and concentrations of military equipment in the east of the country in the last 24 hours.

Following the establishment of the pro-Russian rebels self-proclaimed Donetsk People's Republic in April, instability has prevailed in eastern Ukraine. After declaring their independence, clashes have increased throughout the region where government forces have stepped up their operations. The conflict has come at the cost of an increasingly high death toll.