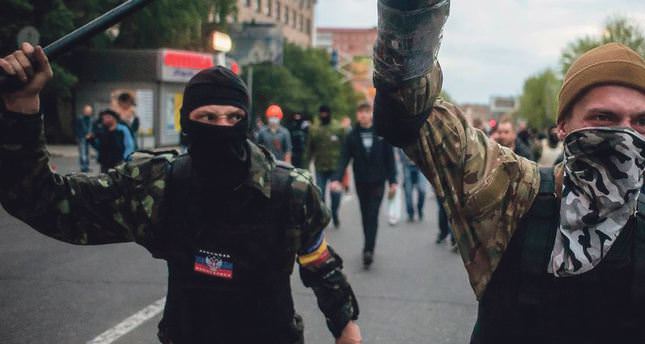 As far-right extremist networks' online presence grow to get people to join their cause, many neo- Nazis from Europe are joining Ukrainian armed groups to fight pro-Russian rebels in eastern Ukraine

The frequent use of the Internet has become popular among many far-right groups as they spread their views and propaganda primarily through social media networks popular with young people.

This also leads to various far-right extremist groups from different countries to connect through the Internet to propagate their message. As their provocative and offensive views circulate more quickly and broadly among Internet users, their online propaganda operations enable them to recruit new followers. As of late, some European far-right groups are using the Internet to mobilize their followers in a fight against Russia.

Islamic State of Iraq and al-Sham (ISIS) militants have easily circulated their views through the use of social media, calling on many foreigners to travel to Iraq to fight with them, and far-right extremists have published their ideas on social media platforms to influence more followers who are ready to fight in eastern Ukraine.

While an increasing number of young people are networking internationally, the latest annual report titled, "Right-wing extremism online 2013," published by jugendschutz. net, a German state-sponsored Internet watchdog, has found that racism and blatant violence promoted by neo-Nazis in Germany has dramatically increased - mainly targeting young Internet users. According to the report on hate propaganda circulated online, rightwing extremists advertise on social media more actively, including neo-Nazis hijacking Twitter hashtags and rotating hip-hop videos. "While in the past the propaganda was more subtle, today we regularly see blatant portrayals of Jews, Muslims, Sinti and Roma and homosexuals as second-class citizens," Stefan Glaser, deputy head of jugendschutz.net, said in a statement, according to Anadolu Agency (AA). Glaser said that there have been 1,628 far-right websites and 3,879 Internet accounts related to far-right contributions on social media in Germany, and urged the international community to tackle the increasing right-wing content targeting young people. The general findings issued by the report are limited to the German Internet world. It also reflects the rise of right-wing extremism in various countries extending beyond Internet platforms hosted in Germany.

Another significant issue is that as rightwing extremists from countries like Germany have faced stricter laws controlling Internet content, more foreign providers and lesser known services like Russian provider vk.com have been used by young followers in order to avoid the laws. The reports show that this safer network has more than 100 million users, including Polish, Czech and German neo-Nazis due to the fact that there is no government control on the activities of web portals based abroad.

The far-right groups' widespread social media campaign facilitates the mobilization of many far-right groups to travel to Ukraine to take part in the heavy fighting in rebel-held cities in the eastern part of the country. Various right-wing extremists from Sweden, Bulgaria and Hungary have reportedly joined paramilitary groups against pro-Russian separatist in the city of Donetsk. The western-backed government in Kiev backs paramilitary groups like the Azov battalion, a neo-Nazi group that has the most chilling reputation amongst other armed groups. The Azov battalion is a special armed group composed of 300 European volunteers.

After two Azov fighters died on Aug. 10 during the heavy clashes in the north of Donetsk, Ukraine's President Petro Poroshenko called one of them a hero, as the Telegraph stated.

Since the "anti-terrorist operation" was launched by the Kiev government several months ago, Ukrainian armed forces and farrightwing militias have been trying to take control of the Russian-backed Donetsk and Luhansk "people's republics," proclaimed in late March. As the Ukrainian government has made significant advances in capturing rebelheld territories, the sharp increase in fighting between pro-Russian separatist rebels and Kiev to take control of eastern Ukraine has caused a significant number of Ukrainians to seek shelter from the civil war.
Last Update: Aug 14, 2014 6:11 pm
RELATED TOPICS