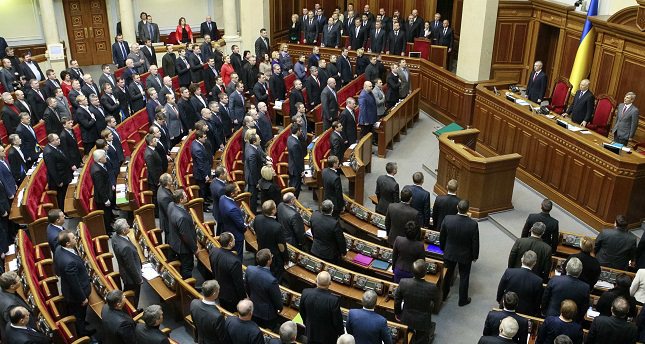 by Aug 14, 2014 12:00 am
The Ukrainian parliament approved a law on Thursday to impose sanctions on Russian companies and individuals supporting and financing separatist rebels in eastern Ukraine.

The government has already prepared a list of 172 citizens of Russia and other countries, and of 65 Russian companies, including gas export giant Gazprom, on whom they could impose sanctions "for financing terrorism".

After Thursday's vote, Prime Minister Arseny Yatseniuk told parliament that Ukraine had taken a historic step. "By approving the law on sanctions, we showed that the country is able to protect itself," he said.

"The law should give a clear answer to any aggressor or terrorist who threatens our national security, our government and our citizens."

Ukraine said on Monday that European energy companies would have to agree major contract revisions when purchasing Russian natural gas if parliament approved sanctions on Gazprom.

Russia is Europe's biggest gas supplier, meeting almost a third of the region's demand, around half of which flows to European clients via Ukraine. European utility companies are worried that Ukrainian sanctions could disrupt supplies during the coming winter.

On Wednesday, the Ukrainian state-owned gas company Naftogaz said the sanctions would not necessarily target Gazprom.

The names of the Russian individuals and companies targeted by the sanctions will not be published until President Petro Poroshenko has signed the law into force.