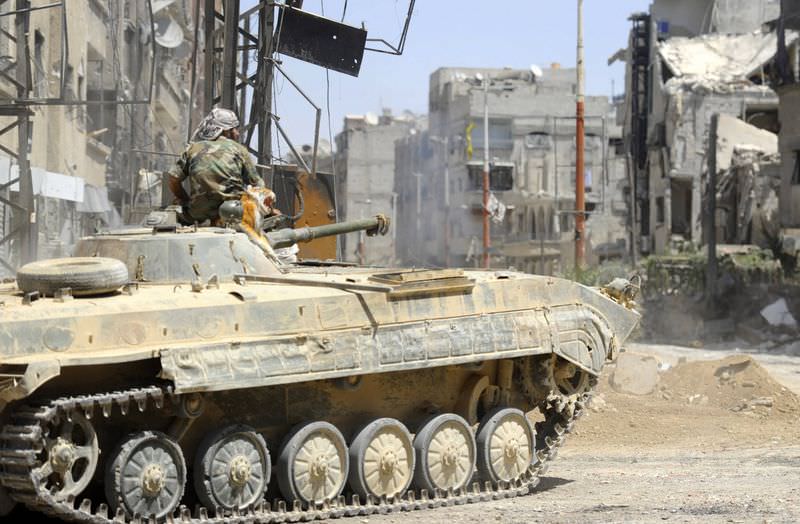 by Aug 15, 2014 12:00 am
At least 14 people were killed Friday when a car bomb exploded in front of a mosque in Daraa province of southern Syria, the Syrian Observatory for Human Rights said.

The Britain-based monitoring group said the death toll for the bombing in the rebel-controlled town of Namar was likely to rise because of the high number of serious injuries.

Among the dead were a woman and a child, the group said.

North of Aleppo city, the Observatory said militants from the ISIS extended their advances, seizing Baghaydin village near the border with Turkey.

On Wednesday, ISIS militants captured eight villages in the area between Aleppo and the border from rival rebel groups.

Those advances came after clashes that killed at least 40 fighters from rebel groups, as well as 12 ISIS fighters, according to the Observatory.
The successes open the way for ISIS to move towards two strategic prizes -- Azaz and Marea.

Marea is a stronghold of the Islamic Front, a coalition or Free Syrian Army that is among those fighting against ISIS.


Azaz sits next to a border crossing with Turkey, which would be a valuable asset as ISIS seeks to expand its self-declared "caliphate" in the territory it holds in Syria and neighbouring Iraq.

But its abuses and harsh brand of religion prompted a backlash from rebel groups that pushed it out of many of opposition-held areas earlier this year.

Since then, it has staged a comeback, bolstered by weaponry obtained in advances across the border in Iraq.

One analyst warned Friday that the fate of Syria's "Western-backed opposition in northern Syria hangs quite literally on a knife-edge" as ISIS advances in northern Aleppo and regime forces advance in Aleppo city.

In an opinion piece published on CNN's website, Charles Lister of the Brookings Doha Centre said Syria's rebels were facing an "existential threat."

Lister said ISIS was likely to move into Azaz, cutting rebel supply lines to Syria, and into Marea, from which it could launch attacks on rebel-held parts of Aleppo city.

Aleppo has been divided between rebel control in the east and regime control in the west since shortly after fighting began there in mid-2012.
In the face of regime advances around the eastern outskirts of the city, coupled with ISIS advances further north, the remaining rebels inside Aleppo are increasingly beleaguered.

Fighting in the province has left civilians there "living in appalling conditions", the International Committee of the Red Cross said on Friday.

The ICRC said it was working with Syria's Red Crescent to deliver medical aid to all parts of the province, in both rebel- and regime-held territory.

"Stepping up aid distributions in the governorate has been the ICRC's priority ever since we established a permanent presence in the city over a year ago," it said.

More than 170,000 people have been killed in Syria since the beginning of its conflict in March 2011, according to the Observatory.