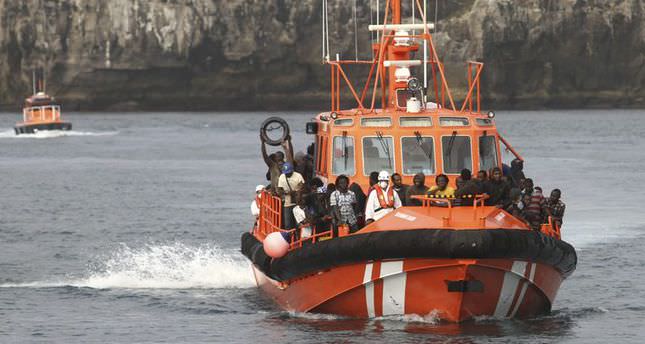 by Aug 15, 2014 12:00 am
Italy said Friday that it wants to halt an operation to rescue boat migrants in the Mediterranean, urging the EU to take it over as the number of people crossing from North Africa surged past the 100,000 mark.

Interior Minister Angelino Alfano said Italy's "Mare Nostrum" operation - a large-scale naval deployment launched after twin shipwrecks last October - could not continue for a second year and must be taken over by the EU border agency Frontex.

"We do not believe that Mare Nostrum, which was a short-term project, can go on for a second year. I will do my utmost to make sure Frontex and Europe take over," he told a press conference in Rome.

"If this does not happen, the Italian government will have some decisions to make. Responsibility for the Mediterranean's borders must belong to Europe," he added.

The Mare Nostrum (Our Sea) operation is estimated to cost nine million euros ($12 million) a month.

Many of those rescued try to avoid being registered on arrival because they hope to travel on to claim asylum in the richer countries of northern Europe.

"The migrants do not want to come to Italy, but to Europe. Does Europe want to defend its borders?" Alfano asked, saying that sea and land borders "are just the same" and must be given the same priority.

"The EU has allocated 80 million euros to Frontex, not just for Mediterranean borders but for all its borders.

"Now the new commission must look again at its priorities, establish defense and border protection as a European priority and allocate the necessary budget," he said.

The U.N. refugee agency this week said that more than 100,000 people had arrived in Italy by sea since the beginning of 2014, over half of them fleeing war, violence and persecution.

Italy's La Stampa daily ran an interview Friday with the woman they said was the 100,000th person to arrive, Syrian mother Iftikar al-Daye.

"I left Damascus two years ago, with my son, daughter-in-law and grandchildren. We have been in Egypt all this time, and left in a boat from there," she told them. "I used to be a cook for the Syrian rebels but left for fear of reprisals."

Over 1,000 migrants were plucked from their boats Thursday, two of them dying after being rescued - one during an airlift to hospital and another aboard a Mare Nostrum boat, according to the ministry, which did not elaborate.

The arrival numbers are far higher than the previous record of some 60,000 arriving in 2011 at the height of the turmoil triggered by North Africa's Arab Spring revolutions.

Most of the migrants making the risky and often deadly journeys come from Eritrea, Somalia and Syria, but many others hail from across Asia and sub-Saharan Africa.