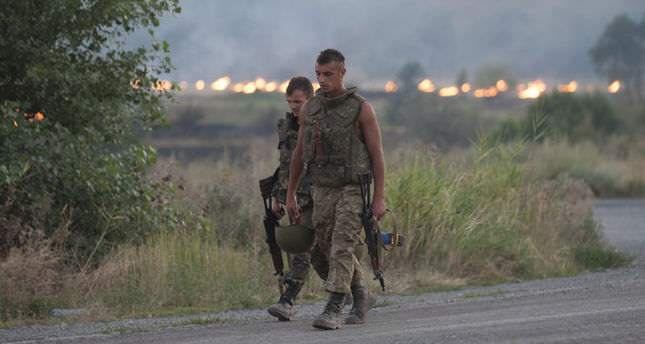 by Aug 15, 2014 12:00 am
Shelling killed 11 civilians and wounded eight more over the past 24 hours in the besieged rebel stronghold of Donetsk in eastern Ukraine, local authorities said Friday.

Fighting raged overnight in central and western districts of the insurgent-controlled industrial hub, the city council said in a statement.

Fierce mortar fire on Thursday pummelled the centre of the city and also severely damaged a satellite town on the outskirts as Ukrainian forces tightened their vice on hunkered-down separatist fighters.

An AFP correspondent saw one body lying on the pavement in the downtown area and damage to apartment blocks.

The new casualty figure comes after local authorities on Thursday said 74 residents had been killed in 72 hours.

Meanwhile, government troops pushed on with their brutal offensive across the region by retaking three small towns, the military said in a statement.

Fierce clashes had also taken place in the outskirt of the stricken rebel bastion of Lugansk, the military said.

Some four months of fighting have left over 2,000 people dead and forced some 285,000 to flee their homes.