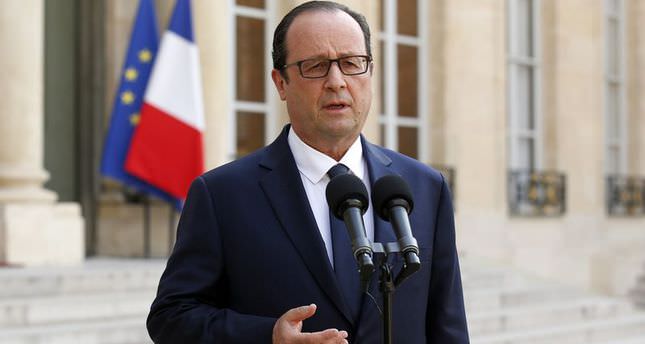 by Aug 20, 2014 12:00 am
French President Francois Hollande called on Wednesday for an international conference to discuss ways of tackling self-proclaimed Islamic State of Iraq and al-Sham (ISIS) insurgents who have seized control of territory in Iraq and Syria.

Hollande did not say when such a meeting could be held or who would be invited but said a global strategy was needed to combat the insurgents, according to remarks published in Le Monde newspaper.

"We can no longer keep to the traditional debate of intervention or non-intervention," Hollande told Le Monde.

"We have to come up with a global strategy to fight this group, which is structured, has significant financing, very sophisticated weapons and threatens countries like Iraq, Syria and Lebanon," he said.

The ISIS has captured wide swathes of northern Iraq since June, executing non-Sunni Muslim captives and minorities, displacing tens of thousands of people and drawing the first U.S. air strikes in the region since Washington withdrew troops in 2011.

France, which has close ties with Iraq's Kurdish regional government, started delivering weapons to Kurdish fighters on Friday to help stop an advance by ISIS into the Kurdish region.

"I believe the international situation is the worst we've seen since 2001," Hollande said. "We are not dealing with a terrorist group like al Qaeda, but a quasi-terrorist state, ISIS."

Speaking on French radio on Tuesday, a Kurdish general said French weapons' deliveries so far had not been sophisticated enough and called on Paris to provide anti-tank missiles.

Hollande said that France's weapons' deliveries had been carried out in agreement with the central government in Baghdad to ensure Iraq remained united.