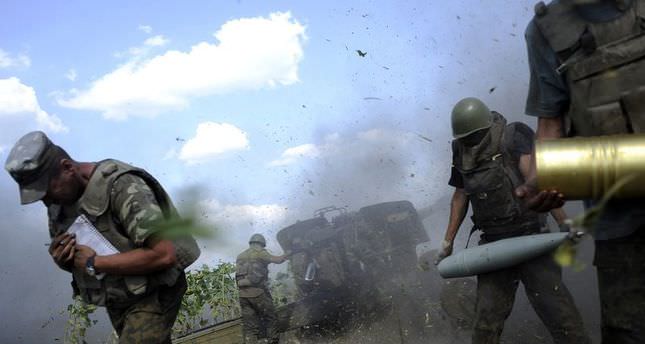 by AA Aug 20, 2014 12:00 am
Ukrainian armed forces have seized control over the separatist-held Llovaysk city in Donetsk province on Wednesday, after clashes with rebels which left 34 civilians and nine soldiers dead.

Donetsk's provincial health department issued a statement on Wednesday saying that clashes in the last 24 hours had claimed 34 civilian lives and wounded 29 others.

The pro-Russian secessionists had to flee as Ukrainian soldiers took control of the city Llovaysk , said army's Anti-Terrorist Operation (ATO) headquarters in a statement.

Fighting still persisted in certain suburbs of Ilovaysk as rebels continued to bombard the army forces using tanks and artillery, the statement added.

Andrey Lysenko, spokesman of the Ukrainian National Security and Defense Council, announced that nine of its soldiers had been killed and 22 others wounded during the clashes.

The health department also put the latest death toll from fighting in the Donetsk region at 951 and the number of injured at 1,748 since March 13.

Ukrainian troops continue their atttacks in separatist-held eastern regions as part of their months-long 'anti-terror' operation in an attempt to restore federal authority in the restive areas of Donetsk and Luhansk.