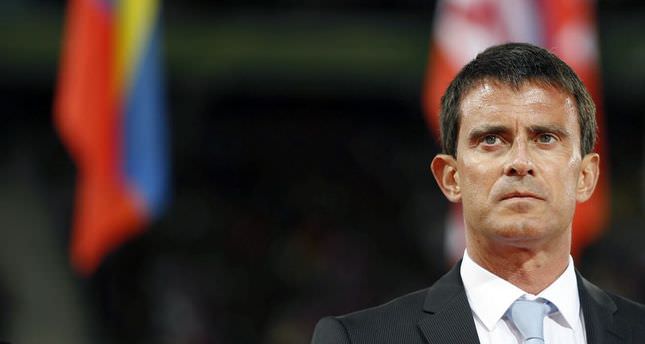 by AA Aug 25, 2014 12:00 am
France is hit by a governing crisis as Prime Minister Manuel Valls's four-month working government unexpectedly resigned on Monday leaving President Francois Hollande to request the formation of a new cabinet, his third in just over two years in power.

The new government is to be formed by Tuesday in line with "the direction that the President Hollande has defined for our country," reads a statement by Elysee Palace.

Only after 147 days into the job, Valls's new government cracked down under the pressure from critics on its economic policies.

Valls defends the economic policies his government put in place and said that it is "out of question" to change it, describing opponents calling for another strategy as "irresponsible."

Critics, however, came from within the government itself as the Economy Minister Arnaud Montebourg and Minister of Education Benoit Hamon called for a change in the country's economic policies.

Montebourg criticized Germany's austerity measures on Saturday and warned France it would no longer "be pushed around" by the EU's economic powerhouse.

He called on both Prime Minister and President to make "a major change" in the economy policy.

The French government's collapse underlines the mounting political and economic pressures on Hollande and Valls's government after new figures released by the national statistics institute showed the French economy had come to a halt, displaying zero growth for the second consecutive quarter.

With a zero growth figure, the central bank warned this month that Hollande had no hope of reaching his target of 1.0 percent growth for 2014.

In April, French members of parliament approved Valls's budget "responsibility pact," which included ?50 billion of social cuts, as well as a ?41 billion cut in corporate payroll taxes for the next three years.

After the resignation of Valls's government, the 10-year borrowing bond rate fell to a record low.

- New cabinet: Valls to Hollande "Me or Montebourg"

As Valls prepares to receive all the ministers of his resigning government at Matignon one by one, the French daily "Le Parisien" reported that Valls said to Hollande "C'est Moi ou Montebourg", meaning "Me or Montebourg."

Valls's comment made as a result of Monterbourg's criticism was the last straw that led the government to resign and which lead media reports to comment that the new government team will almost certainly exclude Economy Minister Montebourg.

There is also some speculation that both Justice Minister Christiane Taubira and Culture Minister Aurelie Filippetti might leave as the pair appeared to support Montebourg's call for economic policy change.

Valls came to power in a government reshuffle after Hollande's Socialist Party suffered deep losses against the right-wing National Front party in the country's municipal elections last May.

On Sunday, a survey revealed that Valls's popularity is plummeting and Hollande's approval rating remains lower than that of any past French president.

A week earlier, another poll revealed that more than eight out of ten French citizens do not trust the government of Prime Minister Valls to improve the country's economic situation.

As various reactions from across the political spectrum in France appear, the majority see it as an end to socialist governance. It seems that Hollande might have to face the decision of calling for the dissolution of parliament and go back to elections.

The head of the far-right National Front party, Marine Le Pen, says the only viable option open to Hollande now is to dissolve parliament and hold elections.

New elections could most probably see her party perform well, given the party's strong uprising in the local and European elections earlier this year.

"It's the continuation of the disintegration of the policy of François Hollande," Le Pen told French daily, Le Figaro. "We are close, closer than ever to the dissolution that we have been calling for weeks."

The former center-right mayoral candidate Nathalie Koscisuko-Morizet, seems to share the same opinion, tweeting "Hollande, already disowned by public opinion, is on his way to losing his majority in the National Assembly."

For the Socialist Deputy Jean-Louis Gagnaire, the new government is "the government of the last chance."