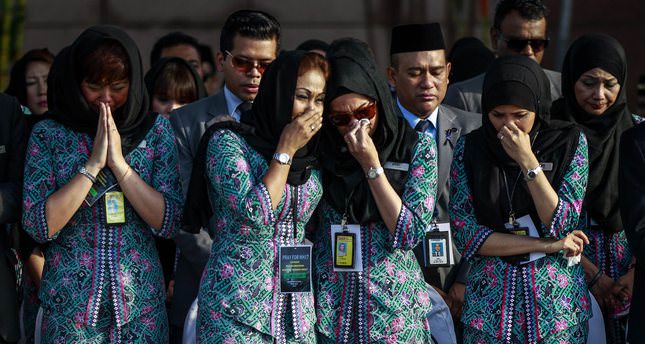 by Associated Press
Aug 26, 2014 12:00 am
Families of passengers who were on the Malaysia Airlines plane shot down over Ukraine are starting to sort through the long process of gaining compensation for their loss.

Officials in the Netherlands, where the majority of Flight 17 victims lived, say that Malaysia Airlines has been making $50,000 payments to the families without admitting any wrongdoing in the crash.

Such payments may create goodwill, lawyers say, but they are not likely to discourage some families from seeking more than the amount promised under an international treaty about $174,000.

Since the early days of commercial aviation, international agreements have governed compensation for crash victims. It is a no-fault system the airline pays a standard compensation even if is blameless. Under a treaty called the Montreal Convention, families can sue for more if the airline or another party was negligent.

Aviation-accident lawyers say it would be almost impossible to collect damages from Russia or the pro-Russian rebels accused of shooting down the plane with a far-reaching surface-to-air missile. Malaysia Airlines will be left as the prime maybe the only defendant, and lawsuits are likely to hinge on the plane's planned route from Amsterdam to Kuala Lumpur on July 17.

Malaysian officials have said that the route over eastern Ukraine was deemed safe by international aviation authorities as long as the plane flew higher than 32,000 feet below that, Ukraine had closed the airspace, presumably because of the threat posed by pro-Russia rebels armed with shoulder-held anti-aircraft guns, which have a limited range. While the U.S. Federal Aviation Administration had prohibited flights over the Crimean Peninsula, the U.S. ban did not extend to eastern Ukraine until after the shoot-down.

And, Malaysian officials have noted, other airlines continued to fly the same route, even on the day that Flight 17 was shot down.

But some aviation lawyers say that the families could have a strong case by arguing that Malaysia Airlines should have stopped flying over eastern Ukraine after the rebels shot down military jets earlier in July.

"The idea that somebody else was equally as stupid as they were is not that good of an argument," said Jonathan Reiter, a New York personal-injury lawyer who has handled many aviation cases.

Families of those on this year's major air crashes Flight 17; Malaysia Airlines Flight 370, which disappeared as it flew from Kuala Lumpur to Beijing; the crash of TransAsia Airways Flight 222 in stormy weather in Taiwan; and the crash of Air Algerie Flight 5017 in Mali could be waiting years for compensation from the airlines and their insurers.

Under the Montreal treaty, lawsuits can be filed in the home country of the victim, the country where the airline is based, where the ticket was bought or where the plane was headed. Americans and Europeans have often received higher awards than families in countries such as Malaysia, where the courts usually stick to the treaty limit, lawyers say.

"You could have two people sitting next to each other who may have the same income. (The family of) one gets multi millions, and the other one gets $75,000," said Justin Green, an aviation attorney whose firm represented families of victims of Pan Am 103, bombed over Scotland in 1988.

For some relatives of those on Flight 17, the pain is still too raw to decide whether to go to court.

In the Netherlands, Kevin Fan is grappling with the job of running two Rotterdam restaurants that were owned by his parents, who, along with his grandmother, died in the crash. Fan's father, who went by Popo, was the chef at Asian Glories; his mother, Jenny, was the hostess.

On a recent day, several bunches of fresh-cut flowers had been left as a memorial outside the small restaurant. The 30-year-old Fan, an acclaimed young chef, was finishing a meeting with two accountants to go over the restaurant's books. He was about to start his next shift in the kitchen.

"It is overwhelming. There is just a lot to arrange," he said, choosing his words carefully. "My family is really stepping in to help."

As for suing the airline, Fan said, "I'm not focused on that right now."

Harun Calehr, whose two nephews were on Flight 17, said that even an initial partial payment from Malaysia Airlines was emotionally taxing.

"My mother and my sister were thinking that it is blood money," said Calehr, who was born in the Netherlands and now practices law including aviation law in Houston. "I told them, 'This is not profiting from the boys' demise. This is your right.' The only accountability you can get from a company is financial compensation, and maybe an apology."

In the months since Malaysia Airlines Flight 370 disappeared, Steve Wang, a Chinese citizen whose mother was on the plane, decided to seek more than the $174,000 limit. It is a form of leverage.

"What I need most is not the compensation," Wang said. "What I really need is (to know) what happened to the plane where is it now? So we want to push them to search in a faster way."

After many crashes, lawsuits are filed against the airlines, the aircraft manufacturer, and the makers of aviation systems on the plane. In the Air Algerie case, Spain's Swiftair, which was operating the flight, could be a target.

Flight 17 is different a civilian airliner shot out of the sky but if families can't sue Russia or the rebels suspected of firing the missile, there is precedent for finding an airline liable after its plane was shot down.

In 1983, a Soviet fighter jet downed Korean Air Lines Flight 007, a Boeing 747 jumbo jet bound from New York to Seoul via Anchorage, Alaska. The KAL plane with 269 people on board had flown off course and into Soviet airspace. The Soviets never compensated any of the passengers' families. Years later, families in the U.S. won settlements and jury awards against Korean Air that ranged up to $10 million, The Associated Press reported at the time.

Governments can invoke sovereignty, but they have compensated families in rare cases. After an American warship shot down Iran Air Flight 655 in 1988, the U.S. agreed to pay $61.8 million to the families of victims.

Libya agreed to pay $2.7 billion in compensation for the bombing of Pan Am Flight 103 over Lockerbie, Scotland, in exchange for the lifting of U.S. and international trade sanctions imposed after the attack. Unlike Russia, the U.S. government had designated Libya a state sponsor of terrorism.