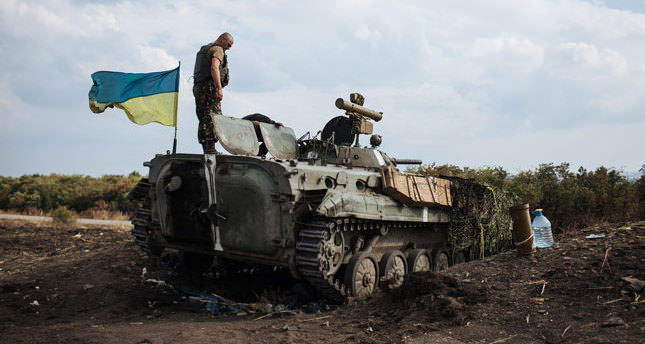 by Aug 26, 2014 12:00 am
Ukrainian government forces engaged with a separatist armored column near the southeastern town of Novoazovsk, about 10 km (6 miles) from the Russian border, Ukraine's military said on Monday. Border guards halted the advance of the column about 5 km northeast of the town, which is on the Azov Sea, it said in a Facebook post.

The new military thrust by the rebels, which a pro-government militia commander said might be aimed at capturing the government-held port city of Mariupul, appeared to open up a new southern front in the five-month conflict in Ukraine's east. Fighting has been hithero concentrated around the two big rebel-held cities of Donetsk and Luhansk to the north.

The commander of a Ukrainian National Guard unit in the area near Novoazovsk where the fighting was reported to be happening told Reuters by telephone: "A war has broken out here." He said he could not speak and ended the conversation. Semen Semenchenko, commander of the pro-government Azov militia, said on his Facebook page that around 50 armoured vehicles had crossed the border from Russia.

About 40 of them were trying to move in the direction of Mariupol while the remainder was moving north towards Amvrosiyivka, he said. "The invasion of the Russian occupiers is taking place," he said. The attacking forces were, for now, "localised and easily neutralised" and there had been up to now no fighting around Mariupol itself, he added.

The column's movement towards Novoazovsk had been accompanied by artillery shelling from across the border, he said. Lyudmila, a resident of Novoazovsk who was reached by telephone, said: "Everything began at 8 o'clock this morning. Tanks appeared - no fewer than 7 of them, and Grads (rockets) and armoured vehicles."

She said some of the tanks bore flags with emblems of a separatist group calling itself the Orthodox Liberation Army. She said the rebel forces had occupied the village of Markine, about 7 kms away from Novoazovsk and were firing on the town. "Novoazovsk has died. People are hiding (from the shelling). We heard rumours of an invasion just a couple of days ago. The Ukrainian flag has been taken down on the city council offices," she said. Asked at a news conference in Moscow about reports of an incursion across the border from Russia into the area of Ukraine near Markine, Russian Foreign Minister Sergei Lavrov said: "I have not heard of this, but there is plenty of disinformation out there about our 'incursions'."