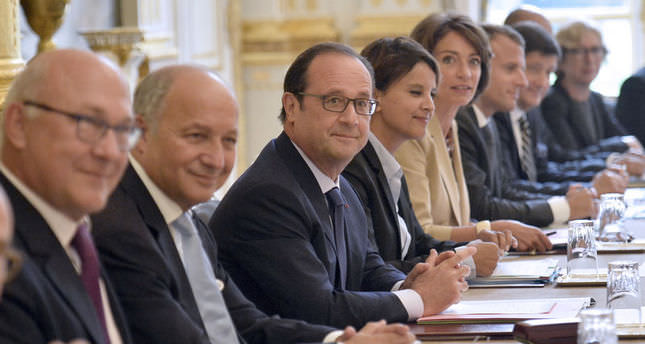 by Daily Sabah Aug 28, 2014 12:00 am
Following the snap reshuffle of the French cabinet earlier this week, the new French government, dubbed Valls II, held its first ministerial meeting on Wednesday morning after French President François Hollande named the new cabinet members. The new cabinet formation shows that only loyal supporters of Hollande and Prime Minister Manuel Valls' government were promoted in order to secure the majority in the new cabinet while ejecting dissident voices. This shows that Valls II has been formed in line with President Hollande's "direction."

After the names were read out on the steps of Elysée Palace, the rebellious left-wing of the Socialist government was replaced by existing ministers loyal to the centrist line. Emmanuel Macron, Hollande's top economic adviser, was appointed as new economy minister. Two other ministers, Culture Minister Aurelie Filippetti and Education Minister Benoit Hamon, who harshly criticized the government's economic policies over the weekend, were cast aside. Hollande appointed the most senior ministers, Manuel Valls as prime minister and his lifelong friend Michel Sapin as finance minister.
Hollande's former coalition partners, the left-wing Greens, do not have a role in the new cabinet.

Valls defended the economic policies his government put in place, saying that a change in the future direction of the economy is "out of the question" while describing the call for another strategy as "irresponsible." Amid the mounting political and economic pressure on Hollande and Valls's government, Hollande will continue his austerity policies along with Germany whose budgetary austerity is believed to be the remedy for restoring deteriorated Eurozone economies. Since Hollande's presidency began in 2012, the French economy has suffered from a total halt, displaying zero growth for the second consecutive quarter. The majority of French people do not approve of Hollande's "stewardship of the economy,"
French opinion polls indicate.

Valls submitted the resignation of his four-month working government on Monday in order to reconcile policy differences within the cabinet to put an end the ongoing political turmoil after the ejected economy minister, Arnaud Montebourg, on Saturday harshly criticized the stagnant French economy with deficit- cutting orthodoxy and Germany's austerity measures applied to all Eurozone states, as undermining France's economic growth and the unemployment rate that France has been suffering from for so long.
Last Update: Aug 28, 2014 2:08 am
RELATED TOPICS