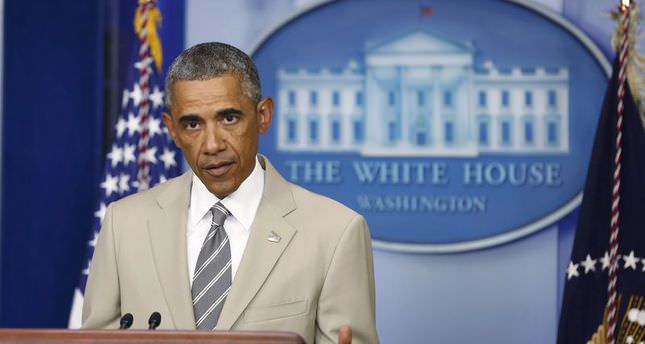 by Anadolu Agency Aug 28, 2014 12:00 am
President Barack Obama made a statement at the White House on latest developments in Iraq and said degrading ISIS militants is going to require a "regional strategy" and assistance from partners in the Middle East.

The president said he has asked the Pentagon to prepare a range of options for confronting ISIS militants.

Obama said he is dispatching Secretary of State John Kerry to the area to work with allies, and ordered Secretary of Defense Chuck Hagel to prepare "a range of options" as he considers future military action.

"As commander in chief, I will always do what is necessary to protect the American people," he said. "Our military action in Iraq has to be part of a broader comprehensive strategy to protect our people and to support our partners who are taking the fight to ISIS."

The U.S. is already going after militant targets inside Iraq and officials said Obama is considering taking similar action in Syria.

President Barack Obama also commented Ukraine and said that the U.S. might impose new economic sanctions on Russia, blaming it squarely for the warfare in eastern Ukraine. But he ruled out any military options and proposed no shift in an American-led strategy that has yet to convince Moscow to halt operations against its far weaker neighbor.

Briefing reporters at the White House, Obama said he spoke by telephone with Chancellor Angela Merkel of Germany, Europe's largest economy and a country that has led diplomatic efforts to end the fighting between Ukraine and Russian-backed rebels. They spoke after two columns of Russian tanks and military vehicles entered the country's southeast and fired Grad missiles at a border post and 1,000 Russian troops poured into the country, according to NATO and Ukrainian officials.

"We agree, if there was ever any doubt, that Russia is responsible for the violence in eastern Ukraine. The violence is encouraged by Russia. The separatists are trained by Russia, they are armed by Russia, they are funded by Russia," Obama said. "Russia has deliberately and repeatedly violated the sovereignty and territorial integrity of Ukraine, and the new images of Russian forces inside Ukraine make that plain for the world to see."